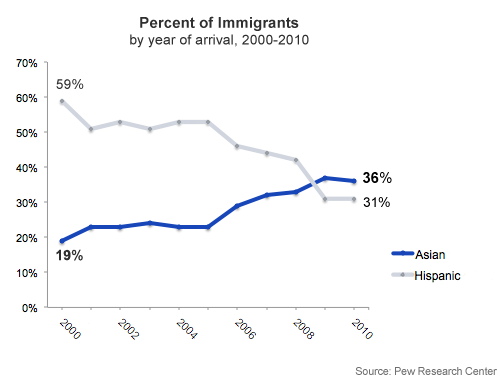 The study, The Rise of Asian Americans, found that Asians living in the U.S. are more likely than the general public to be satisfied with their lives, finances and the direction of the country.

Cary Funk, a senior researcher for the report, said various factors are influencing Asians to immigrate to the United States, including employment and educational opportunities.

“Generally, it’s a mix of reasons,” she said. “One of the most common reasons for immigration is for family reunification, but it’s usually a mix of employment and education and family reasons that Asians, as well as other immigrants, are coming to the U.S.”

The study cited a rise in Asian Americans from less than one percent of the U.S. population in 1965 to 5.8 percent today. Funk called that increase “striking,” but she could not pinpoint how high it will go in the future.

“Part of that rise has to do with the change in our immigration policies in 1965, so that opened the immigration stream from all parts of the world,” she said. “What we’re seeing from Asian Americans, keep in mind, is that they are a majority immigrant group, [with] 74 percent of Asian American adults [being] foreign-born.

Of course there’s some variation across sub-groups of Asians, but of the six largest U.S. Asian groups, Japanese Americans are majority U.S.-born, and the other five are majority foreign-born.”

via Report: Asian Immigrants to US Surpass Hispanics.