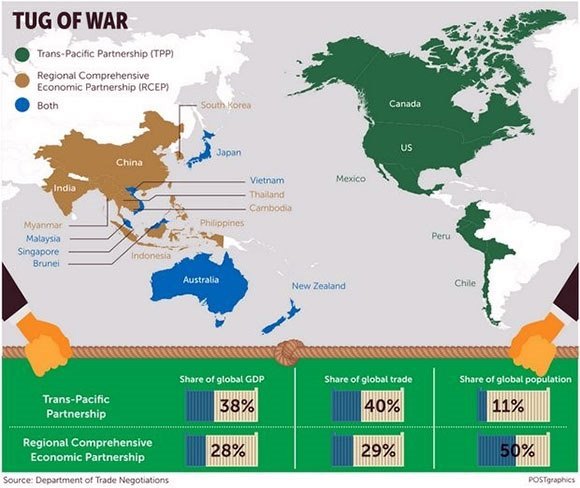 With the demise of the U.S.-led Trans-Pacific Partnership agreement, attention in the Asia-Pacific region has turned to Kobe for the next round of negotiations on the Regional Comprehensive Economic Partnership (RCEP).

The five-day Kobe meeting marks the first time RCEP negotiators have met since Donald Trump became U.S. president and pulled America out of the TPP.

It comes as RCEP supporters grow more hopeful that the TPP’s failure is an opportunity to make RCEP the fundamental Asia-Pacific trade agreement for the 21st century, even as divisions over issues ranging from tariff reductions and migrant rights to buying locally and intellectual property protection has leaders cautioning that a deal by the end of this year won’t be easy.

In addition, RCEP’s opponents warn it could further widen the economic gap between wealthier and less-developed members and even lead to a regional health crisis by strengthening rules for pharmaceutical companies that restrict the ability of people to access cheaper generic drugs.

Launched in 2012, the first round of negotiations took place in 2013, just as the TPP talks were moving forward. Seven RCEP members (Australia, Brunei, Japan, Malaysia, New Zealand, Singapore and Vietnam) were also involved with the TPP.

Thailand’s industrial confidence and car exports down in January