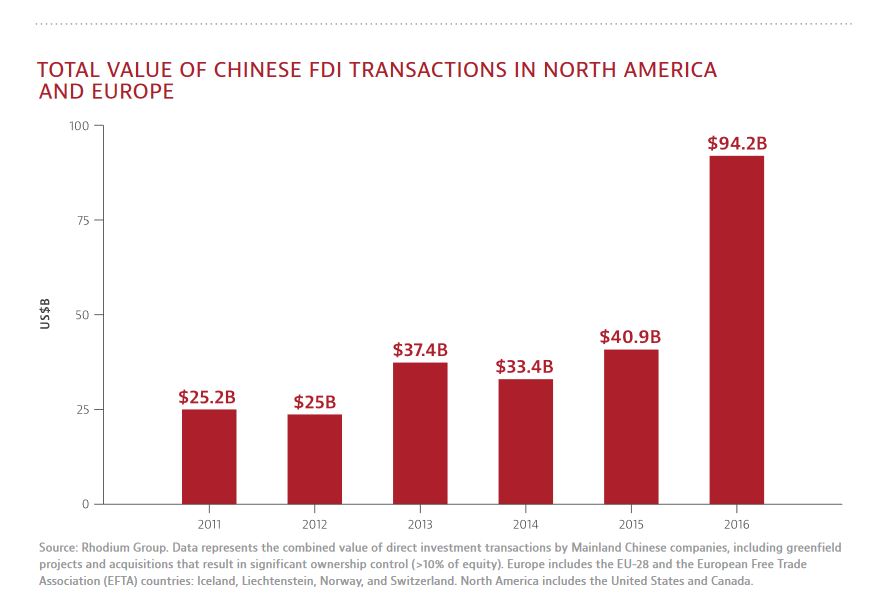 Combined Chinese direct investment in the advanced economies of North America and Europe more than doubled in 2016 to a record $94.2 billion as China continued its transition to a new growth model, in line with its rapidly maturing economy.

For the first time since 2013, Chinese investors poured more money into North America ($48 billion, up 189 percent) than Europe ($46 billion, up 90 percent), with the United States accounting for 94 percent of the North American total. This was against a backdrop of global Chinese outbound investment hitting a new high in 2016 of almost $200 billion.

Privately-owned Chinese companies led the trend, outpacing investment by state-owned enterprises to close deals accounting for 70 percent of the total, signaling the continued rise of corporate China in the global economy.

However, the outlook is mixed as 2016 also saw 30 canceled deals (20 in Europe, 10 in the United States), worth an unprecedented $74 billion. While 2017 is likely to be another strong year as deals reach financial close, the number of newly announced Chinese acquisitions in Europe and North America has dipped since the first half of 2016.

“Well over half of all Chinese direct investment into Europe and North America since 2000 has taken place in the last three years, marking the continued influence of globalization and the rapid development of China’s economy,”

said Michael DeFranco, global head of M&A at Baker McKenzie. “The deal pipeline is strong in both Europe and North America, but political and regulatory uncertainties are weighing on the outlook. A short term slowdown in new deals is likely in 2017, driven both by China’s temporary measures to slow capital outflows and tougher screening of inbound deals in the US and Europe.”

The scale of recent investment, counterbalanced by growing numbers of troubled transactions, in Baker McKenzie’s report with Rhodium Group, which is unique in analyzing patterns of Chinese investment in the two regions’ high-income economies.

In Europe, Chinese investors focused on Germany and the UK, which between them saw 46 percent of all investment in Europe.

Germany saw inbound deals from China rise nearly tenfold, from $1.3 billion in 2015 to $12.1 billion last year. The UK attracted $9 billion of investment, an increase of 130 percent over 2015. The UK total was driven by deals announced prior to the EU referendum closing in the second half of the year, making it too early to judge the impact of Brexit.

Source : Chinese Investment Tripled in US in 2016, Doubled in Europe