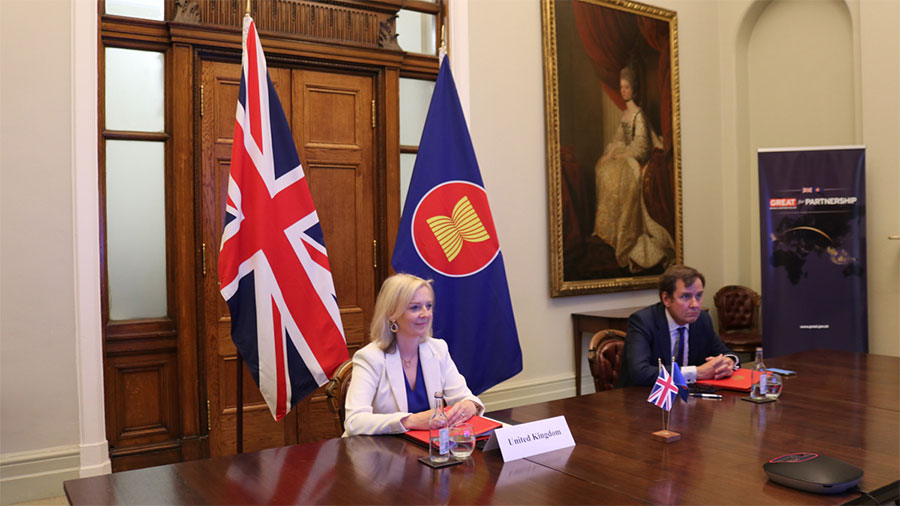 The British Foreign Secretary, Liz Truss has been on a visit to ASEAN as she tries to boost British trade relations with Southeast Asia. The UK has trade agreements already in place with Singapore and Vietnam and has been getting closer to Thailand and Indonesia.

What London is really after though is access to the 10 members of ASEAN in total, (Brunei, Cambodia, Indonesia, Laos, Myanmar, and Philippines, Singapore, Thailand, and Vietnam). Brunei, Malaysia, and Singapore are members of the Commonwealth.

Agendas differed slightly in the meetings. the meeting in Kuala Lumpur with Malaysia’s Foreign Secretary Saifuddin Abdullah, focusing on maritime security (read: warship sales) and free trade (read access to ASEAN). The UK’s current bilateral trade with Malaysia this year will reach about £5 billion (US$6.7 billion). To put that into context, British trade with Luxembourg and Finland is higher. Clearly, a lot of work needs to be done.

In Indonesia, Ms. Truss also met with Indonesia’s Foreign Minister, Retno Marsudi for trade and policy issues, including the situation in Myanmar, and curiously, considering it’s in a different part of Asia, Afghanistan. Although ASEAN as a bloc is an observer state to the Shanghai Cooperation Organization, now the de facto military cooperation trying to keep a lid on matters together with China, India, Russia, and Pakistan as well as the Central Asian nations of Iran, Turkmenistan, Kyrgyzstan, and Uzbekistan.

Counterterrorism and cybersecurity were also discussed along with ‘Build Back Better World’ – the British Foreign Ministry acting as marketeers for Joe Biden. British trade with Indonesia, a country with a population of 275 million, currently amounts to just £4 billion (US$5.3 billion). That is just slightly above the UK’s current trade with Cyprus.

Ms. Truss also visited Bangkok, where she met both Prime Minister Chan-o-cha and Foreign Minister Don Pramudwinai to discuss digital technology and tech investment. The UK’s current bilateral trade with Thailand is also about £5 billion (US$6.7 billion). Interestingly, this is roughly the same amount as the value of shares that Elon Musk has just sold in his Tesla EV company.

It remains true that EU membership deflected London from developing trade ties in ways perhaps it should have been doing was it to have remained out of the EU. However, progress will be difficult. The EU, with a collective consumer market of some 450 million is always going to be a larger and more attractive proposition than the UK’s 68 million. Nonetheless, the bilateral trade volumes between the UK and ASEAN, and especially with Commonwealth nations such as Malaysia, have been allowed to decline. The good news is that there is room for expansion.

This brings us neatly onto a question apparently asked Liz Truss this week, where (courtesy of the Beijing to Britain blog).

Tory politician Daniel Kawczynski asked, “What steps are being taken to (a) reduce reliance on China for the manufacture of system-critical components for UK national infrastructure projects and (b) source those components instead from members of The Comprehensive and Progressive Agreement for Trans-Pacific Partnership?” (CPTPP).