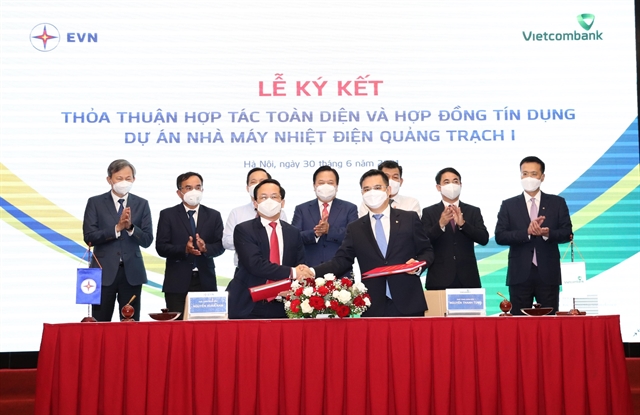 Hanoi (VNA) – The Joint Stock Commercial Bank for Foreign Trade of Vietnam
(Vietcombank) will provide a credit worth 27.1 trillion VND (1.18 billion USD)
for the Quang Trach 1 thermal power project in the central province of
Quang Binh.

To this effect, the bank and Vietnam Electricity (EVN) signed a comprehensive cooperation agreement and financial credit contract supporting the project in Hanoi on June 30.

It is expected to be kicked off in the third quarter of this year and completed in 2025.

EVN assigned the Power Project Management Board No 2 as the representative of
the investor of the project along with projects at the Quang Trach Power Centre
with a total area of about 48.6 hectares in Vinh Son village, Quang Dong
commune, Quang Trach district.

The project includes two power units with a total installed capacity of 1,200
MW, when put into operation, the plant will provide the national electricity system with an annual output of about 8.4 billion kWh, contributing to ensure the safety of national energy security and improving the safety and stability of the power system.

The Quang Trach 1 thermal power plant is considered to be the driving force for
economic growth for Quang Binh province and the North Central region, thereby
contributing to create favourable conditions for the local development of
supporting industry, contributing about 1.2 trillion VND per year to the state budget, and creating stable and long-term jobs for local workers, especially highly-qualified workers./.

END_OF_DOCUMENT_TOKEN_TO_BE_REPLACED

Vietnam is projected to be the fastest-growing internet economy in Southeast Asia in the next 10 years according to the e-Conomy SEA 2021 report by Google, Temasek, and Bain, Southeast Asia’s Internet economy research program. It also predicts that by 2025, the country’s overall internet economy will likely reach US$57 billion in value with a compound annual growth rate (CAGR) of 29 percent.