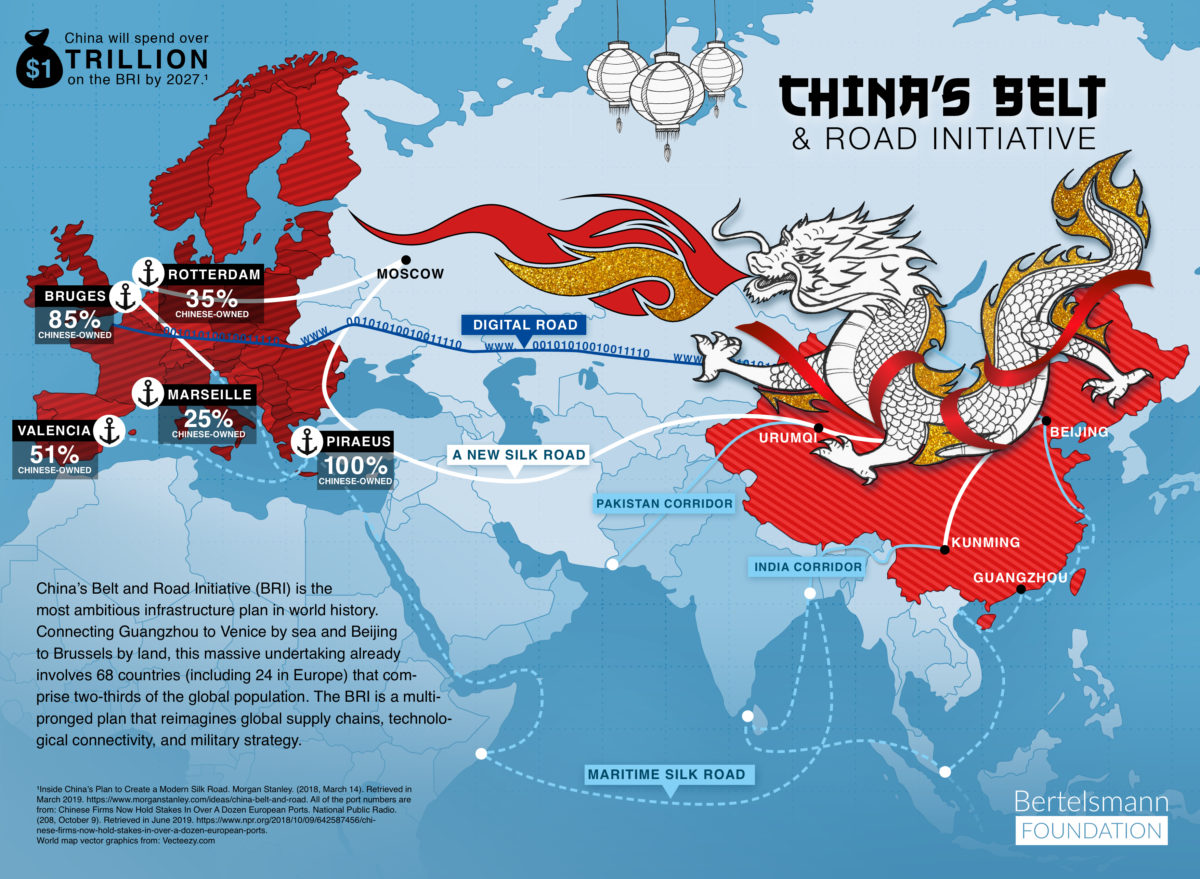 China’s Belt and Road initiative is set to be the most influential economic development project in recent history. It’ll be an investment measured in trillions, connecting dozens of nations with roads, rail lines, shipping routes, and trade deals.

Beijing’s “One Belt, One Road” Initiative puts more than 130 countries in its strategic plan, in which Chinese companies were provided a large amount of capital to invest heavily overseas and enter the vital infrastructure networks of participating countries.

When Xi unveiled the BRI scheme seven years ago, he said it aimed to make the “economic ties closer, mutual cooperation deeper, and space of development broader.”

But instead, it has made developing countries’ debt unsustainable, mutual suspicion deeper, and the space of development more polluted.

For countries on the periphery of the new Chinese empire — but also in Africa — the Belt and Road project provides a path capable of saving them from painful isolation.

However, these countries are now facing crises or are even on the verge of bankruptcy due to their inability to repay China’s high-interest loans.

A 2018 study from the Center for Global Development has noted that in the case of Djibouti, home to China’s only overseas military base, public external debt had increased from 50% to 85% of GDP in just two years. Much of that debt consists of government-guaranteed public enterprise debt owed to China’s Export-Import Bank (EXIM).

Many governments have become worried about ulterior motives behind BRI projects, many of which have dual-use commercial-military capabilities and are increasingly connected to Chinese digital technologies and networks and satellite systems.

The case of Sri Lanka is one of the most vivid examples of China’s ambitious use of loans to gain influence around the world.

Sri Lanka’s Hambantota Port provides one of the best-known examples of an unsustainable debt burden. In December 2017, Sri Lanka handed the port to China, and 15,000 acres of land around it, via a 99-year lease due to its inability to service debts of more than $8 billion to Chinese firms.

The transfer gave China control of territory just a few hundred miles off the shores of India, and a strategic foothold along a critical commercial and military waterway.

The debt deal between China and Sri Lanka illustrates the Belt and Road Initiative as a debt trap for vulnerable countries around the world, fueling corruption and autocratic behavior in struggling democracies.

Any country that becomes fully integrated with the Belt and Road, is expected to align itself with China on a wide range of political and economic standards.

Among them, rules and principles ranging from internet governance to financial supervision, state aid and environmental standards.

But many BRI countries score low on major global corruption indices, and Cambodia is one of the worst. Beijing provided Hun Sen with $600 million for support in the 2018 elections followed by an unrestricted $100 million direct grant.

“A threat comparable to Russia”

Enthusiasm for China was on the rise in Eastern Europe eight years ago, when 16 countries in the region formed an economic cooperation forum with China called “16 plus 1”, and congregated for the first time in 2012.

The 16 countries include 11 European Union members, such as Hungary and the Czech Republic. The forum became “17 plus 1” in 2019 when Greece joined up.

China had proposed grand infrastructure building plans for the region as part of its Belt and Road Initiative, but they have not advanced as expected.

Noting that China is rapidly expanding its espionage network in the Czech Republic, the Czech intelligence agency said in November last year that China had become a threat, “comparable with Russia”, to the country.

Detachment from China is now spreading in Eastern Europe, encouraged by the Czech Republic. China was greatly angered when Milos Vystrcil, president of the Czech Senate, visited Taiwan for several days from the end of August.

Furthermore, Poland, the Czech Republic, Romania and Estonia agreed to cooperate with the U.S. on 5G cybersecurity protection.