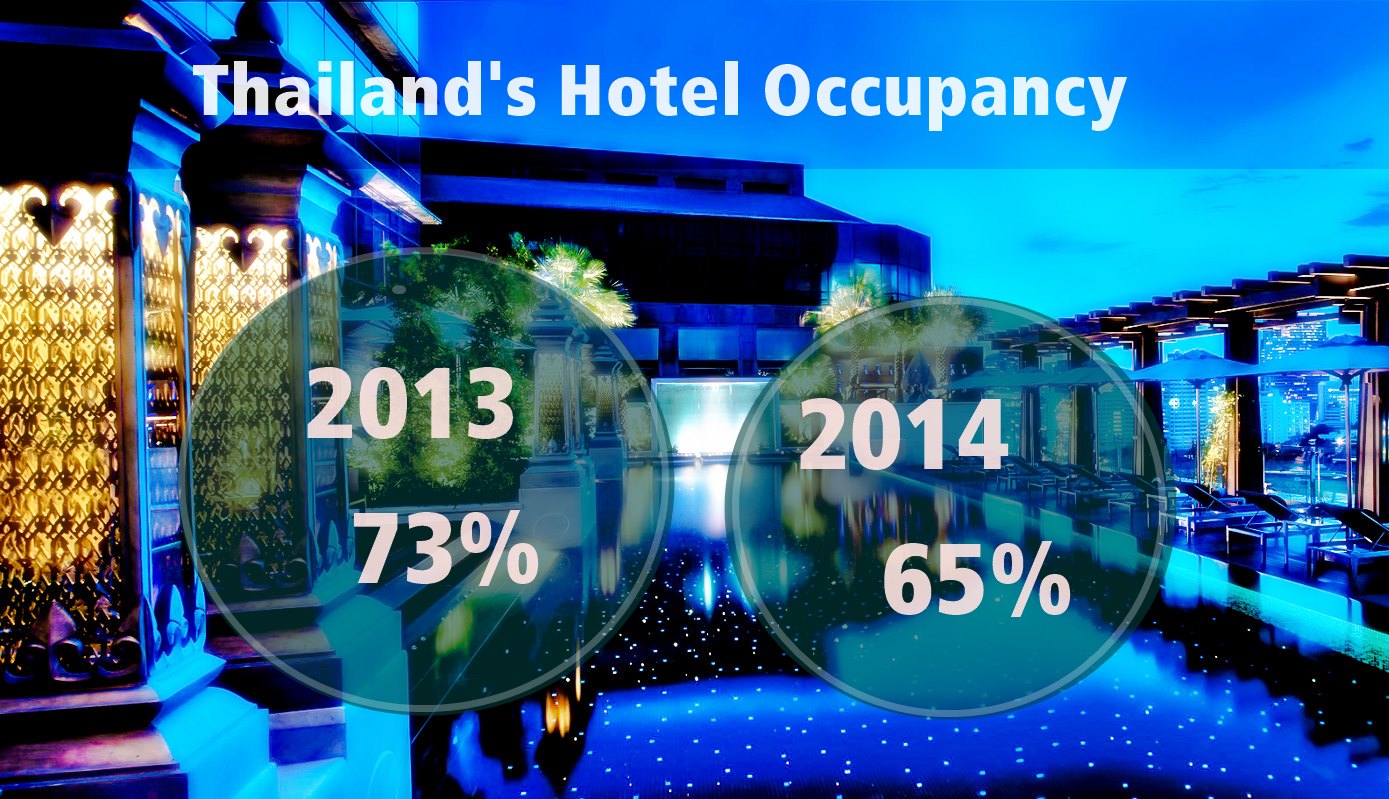 A recovery that began to emerge late in the third quarter of 2014 couldn’t help Thailand’s hotel industry overcome a dismal first half of the year as the industry reported a year-over-year  occupancy decline of 11.3 percent.

The country’s occupancy drop was primarily driven by Bangkok’s hotels, which had a year-over-year 16.2-percent decline. During more than six months of the year, occupancy in the city was down more than 20 percent year over year.

Phuket’s occupancy dropped 5.7 percent year over year, which led to levels just slightly above those of 2011—this mainly driven by low-season (May through June) decline beyond normality—and less peak season effects. Koh Samui held up reasonably well, with a slight decrease in occupancy of 1.6 percent over 2013, and the only negative effect year over year was during low season.

The recovery that began late in the third quarter blossomed in Q4 as numbers dramatically turned around for Bangkok. After the dismal start to the year, revenue per available room increased by 2.5 percent year over year in the last quarter. Occupancy in December for Bangkok was one of the highest recorded by STR Global since 2000. It was the best Q4 for Bangkok occupancy since 2006.

The story is similar for Thailand as a whole. RevPAR was the second best Q4 for the last decade. It would thus suggest that six to nine months is the new recovery time norm for Bangkok, according to Jesper Palmqvist, STR Global’s area director-Asia Pacific.

In local currency terms, average daily rate for Thailand as a whole in 2014 was up 2.6 percent year over year, with Bangkok once again proving that it is able to sustain rates throughout market turmoil. While there were hotels that lost significant rates, the fact that ADR ended flat year over year speaks volumes to the amount of hotels firmly holding their ground.

It was slightly different for resort markets. Though Koh Samui’s rates for peak season aren’t at historic record levels, the market’s hotels have continuously lifted rates during lower demand seasons, with less of the drastic negative rate movements seen in the past, Palmqvist said. This is particularly interesting since Koh Samui has more seasonal variety than a destination such as Phuket.

Phuket has consistently raised peak season rates (December through January) since the reboot in 2010 and after the low season floor was raised back in 2012; it has been sustained each year.

One impressive market to mention was Chiang Mai, though occupancy decreased 4.2 percent on a year-over-year basis. The market’s hotels had positive RevPAR growth driven by continued positive ADR movement. This is particularly qualitative when considering that Chiang Mai has grown rate by solid numbers for the past few years, according to Palmqvist.

Hua Hin was also able to hold rates reasonably well, but Pattaya suffered more due to a 10-percent decline in occupancy year over year.

While China’s biggest corporates are increasingly flexing their global muscle as the country’s economic and geopolitical influence accelerates, Bangkok is the 10th most popular destination for mainland firms expanding overseas. END_OF_DOCUMENT_TOKEN_TO_BE_REPLACED

With its strategic location in the center of ASEAN with emerging markets, including Cambodia, Laos, Myanmar, Malaysia and southern China, on its border, Thailand is well position to connect investors to new opportunities arising from the increasing border trade and the region’s rapid economic growth.
END_OF_DOCUMENT_TOKEN_TO_BE_REPLACED

Twenty years ago, day trading was the great new pastime for Americans, all of them tuned to the financial news and reports on the day’s newest crop of IPOs. END_OF_DOCUMENT_TOKEN_TO_BE_REPLACED