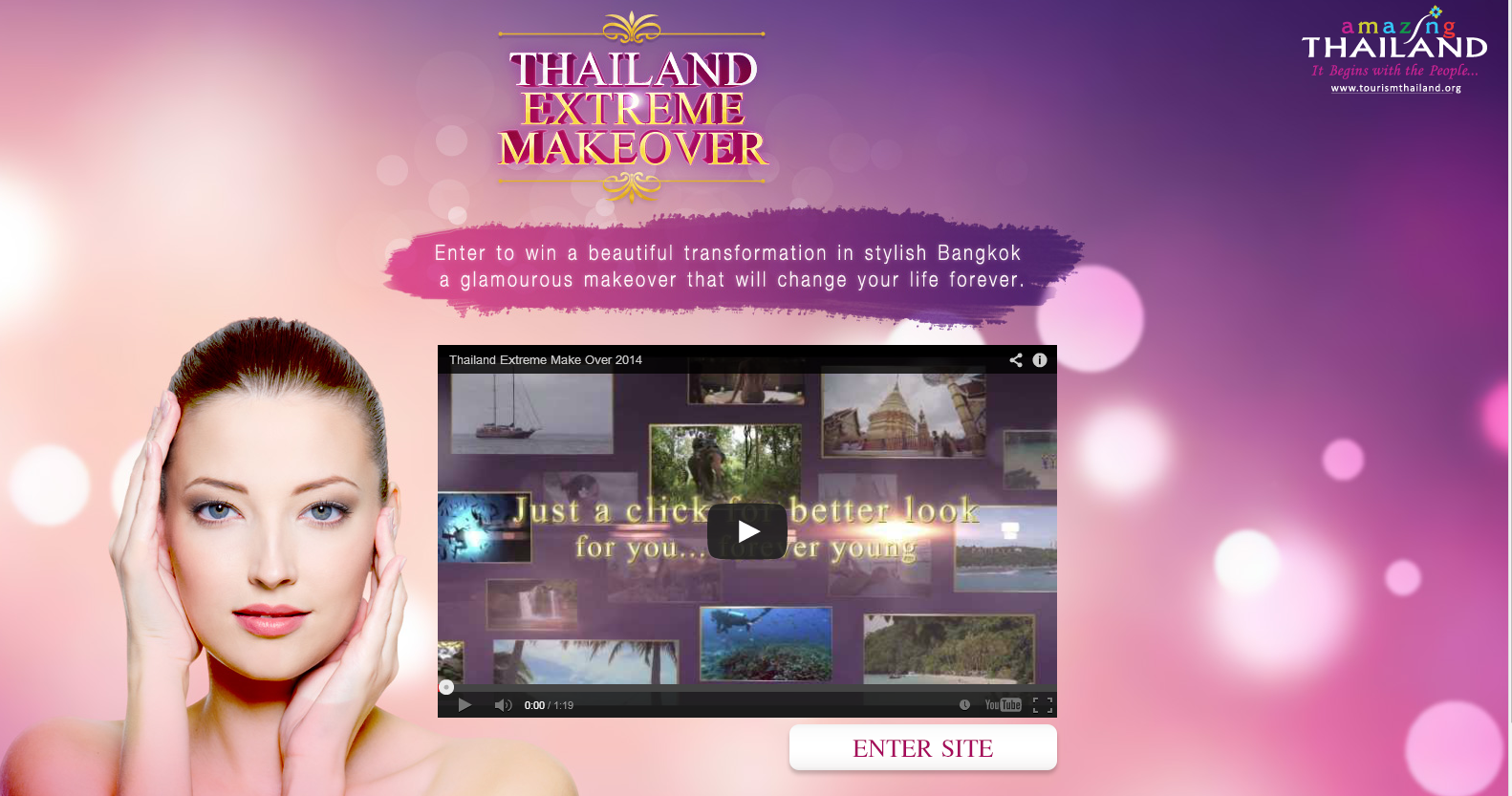 In desperate need of a cheap makeover ? The Tourism Authority of Thailand (TAT) has kicked off its new digital marketing campaign, “Thailand Extreme Makeover” to promote the kingdom as a centre of medical tourism.

Tourists from all over the world are invited to join a “reality-type” contest in which the selected contestants undergo makeovers including various cosmetic surgery procedures.

In desperate need of a cheap makeover ? Try Thailand

There is a 5,000 US Dollars cash prize up for grabs as well as a chance to win luxury trips to Thai tourist destinations.

Mr. Thawatchai Arunyik, Governor of TAT said, “The Thailand Extreme Makeover campaign is a reality competition that will not only create awareness about Thailand as a destination for medical tourism and the excellence of our medical facilities, but also promote the kingdom as a travel destination with something for everyone.

“Thailand already has a great reputation for its excellence in medical care and people come here for operations of all kinds. The expertise of our doctors and wide range of procedures we can offer are turning Thailand into the “medical hub” of Asia.”

The “Thailand Extreme Makeover” digital marketing campaign will give anyone who likes the idea of completely changing their appearance, the chance to do so at the hands of skilled Thailand-based surgeons. Anyone interested in joining the campaign is invited to send photos showing their face from all angles – straight on; at the left and right profile; from the back and from above.

Candidates also need to include their personal health profile and reasons for wanting a makeover. The judging committee, made up of medical experts and beauty surgeons, will then select three (3) lucky candidates who will be invited to Thailand for their life – and face-changing trip. During their stay in Thailand, each of the contestants will be videoed and clips will be uploaded to the special Thailand Extreme Makeover website.

This will allow their friends and relatives to watch and follow the progress of the makeover as well as allow members of the public to vote for their favourite contestants. In the end, the contestant with the highest number of votes will win the 5,000 US Dollars cash prize and a luxury tour package in some of the best accommodation in Thailand.

The two runners-up will also be treated to their own luxury tour packages to enjoy in the kingdom. And it is not just the contestants who benefit. The audience who follows their progress and votes for their favourites also get the chance to win various beauty rewards and prizes.

Despite growing challenges from other attractive medical hub countries in recent years, Thailand has retained its premium status as the world’s premier medical tourism hub. Bumrungrad International Hospital is one such institution.

Bumrungrad International Hospital, operated since 1989, is the largest private hospital in Southeast Asia. Located in the heart of Bangkok, the hospital serves over a million patients annually. Over 520,000 are international patients, including thousands of expatriates who live in Bangkok and nearby countries, plus visitors from some 190 countries around the world.

The reason the hospital opted to open its services for international patients goes back to the 1997 Asian economic crisis, which resulted in a very weak local economy. The hospital had targeted a premium market, in which during that period, and even wealthy Thais were hit by the crisis. However, the hospital was surprised by the rising number of international patients, most of them coming by word of mouth. “I think a word of mouth gets out. At first they came as tourists, then they might have some accidents and they came to hospital.

They were surprised to have this kind of medical service. When they go back home, they tell their friends and maybe there are some direct flights. So people start saying this is very interesting,” said Kenneth Mays, Bumrungrad Hospital marketing director. As the hospital’s reputation on medical tourism hub became established, it has opened international representative offices in Australia, Bahrain, Bangladesh, Cambodia, Ethiopia, Hong Kong, Indonesia, Mongolia, Myanmar, Nepal and Vietnam to facilitate their clients’ medical journeys.

said the hospital marketing director. But Thailand is not the only country which positions itself as a medical tourism hub. Hospital Marketing Director Kenneth Mays said Singapore and India have always been rivals, with newcomers like Malaysia, Turkey, South Korea and Costa Rica. But he believes Thailand will remain the top player in the industry and benefit from the integration of the ASEAN Economic Community.