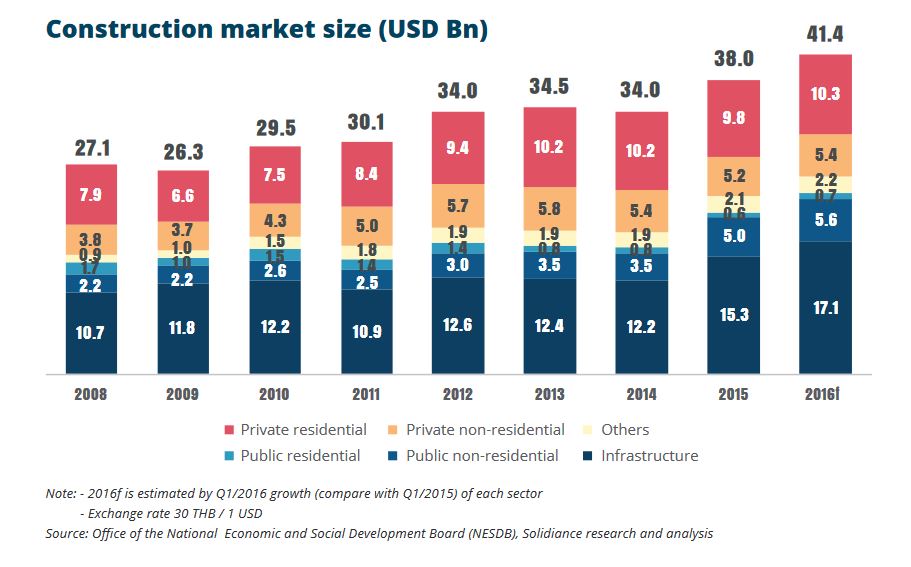 Thailand is currently one of the most exciting hubs for contractors in Southeast Asia today, with a construction market value estimated at USD41.4 billion last year, according to a white paper released last week by corporate strategy consulting firm Solidiance.


New buildings and infrastructures amassed throughout the kingdom at a faster clip over the last few years, a trend that would indicate an especially busy year ahead for Thai real estate.

Overall, the number of buildings in the country increased 1.4 percent on average every year between 2012 and 2014.

Thailand’s construction market is estimated to reach up to USD 41.4billion by 2016, with about USD 17.9billion coming from private investments and about USD 23.4 billion from the public sector, which includes the infrastructure segment.

Of the USD41.4 billion siphoned into Thai construction last year, USD23.4 billion can be traced to the public sector.

Since 2015, transport officials have executed plans to increase infrastructure investments in Bangkok’s mass rapid transit line, although delays have been widely reported.

Such increase in public works have literally widened the path to residential construction in the Thai capital. With public transit lines currently under construction, Bangkok’s city center is gradually expanding, Solidiance researchers contended.

The government has also approved the development of the Eastern Economic Corridor, which concentrates on construction of transport infrastructure, sea, and rail. This move will further support Thailand’s position as a major economic zone in ASEAN.