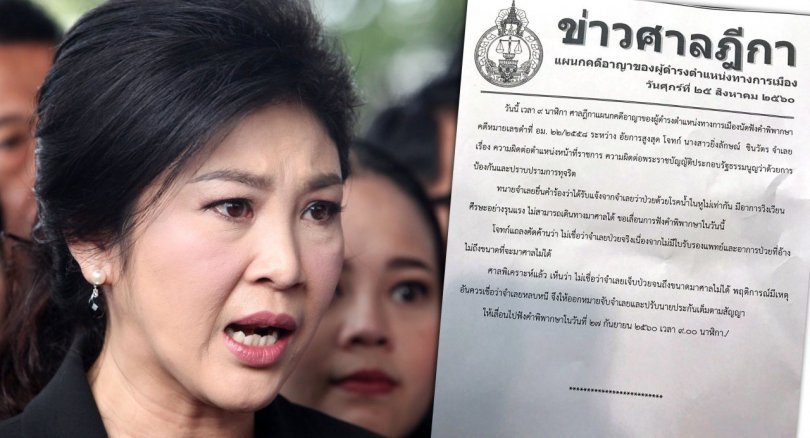 The Supreme Court’s Criminal Division for Holders of Political Positions today issued warrant for the arrest of ex-premier Yingluck Shinawatra after she failed to appear in the court to hear her judgement on the rice pledging scheme.

She failed to arrive to hear the verdict which the court scheduled to announce at 10.00am she still didn’t arrive, prompting the court to schedule September 27 as the day to announce the verdict.

At the same time the court also issued warrant to arrest her making Former prime minister Yingluck Shinawatra a fugitive of the law.

While thousands of her supporters gathered outside the Supreme Court, Yingluck did not appear as expected citing health reasons.

Sources close to Yingluck told Thai media Khaosod that she left Thursday for Singapore where her brother, himself a fugitive former prime minister, was waiting. The claim cannot be immediately verified and no statement has been made about her whereabouts.

The Supreme Court’s Criminal Division for Holders of  Political Positions today ordered the seizure of ex-premier Yingluck Shinawatra’s bail bond after she did not show up for court appearance to hear her verdict on the rice pledging scheme scam.

The court considered her absence as an attempt to escape although she would earlier assigned her lawyer to notify the court that she could not attend the hearing of the verdict because she developed sickness from the imbalance of fluids in the ears.

The rice-pledging programme implemented by the Yingluck government did not only require a colossal budget over three years (late 2011-early 2014), but it also brought about a spate of irregularities and corrupt practices seen in the abuse of public power for personal benefit during the pledging procedures and in fake G2G rice purchase contracts.

The scheme also tarnished Thailand’s image in the rice market, as the quality of the grains that were warehoused for a long time deteriorated, leading foreign buyers to lose confidence in Thai rice and choose to buy from other rice-exporting countries.