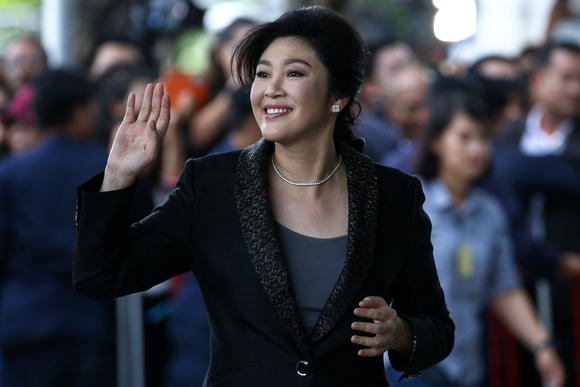 The nine-member bench condemned Yingluck, who fled Thailand in late August, to five years in jail for criminal negligence. She becomes the highest-ranking elected government leader to face such a fate for a bad government policy.

The case, which was heard over 18 months, acquired political overtones from the beginning after the ruling junta weighed in.

Prime Minister Prayuth Chan-ocha, the junta leader, invoked Section 44 of Thailand’s post-coup constitution, better known as the “dictator’s law” for the absolute powers it bestows, to grant immunity to government officials who testified in the trial.

“The accused (Yingluck) knew that the government-to-government rice contract was unlawful but did not prevent it,” the verdict stated, referring to sales of Thai rice through fake deals to Chinese buyers.

The court’s verdict will be a shot in the arm for Prayuth, who as army chief staged a coup in May 2014 to overthrow Yingluck’s elected administration. He justified his putsch because he said Yingluck’s government was corrupt.

The court’s unanimous judgment comes on the heels of a harsher ruling the same bench of judges handed down on Aug. 25. Then, they found Boonsong Teriyapirom, former commerce minister in the Yingluck administration, guilty of corruption and condemned him to a 42-year prison sentence.

In all the cases, the court took a dim view about the Yingluck government’s measures to sell rice to foreign governments after it implemented a lavish rice subsidy scheme for local farmers, which cost the state 500 billion baht ($15.0 billion), to boost the rural economy. “The accused (Yingluck) knew that the government-to-government rice contract was unlawful but did not prevent it,” the verdict stated, referring to sales of Thai rice through fake deals to Chinese buyers.