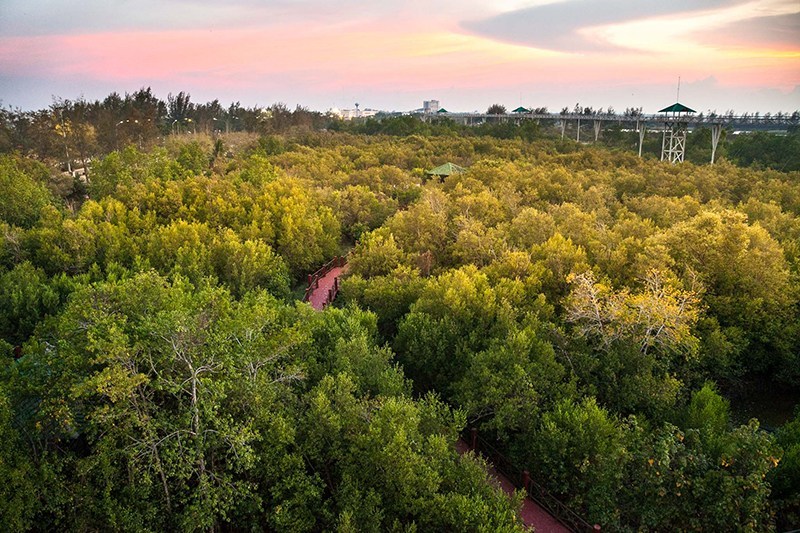 After landing in Hat Yai, the TAT Newsroom headed south before stopping at the scenic Bang Lang Dam on the Pattani River to take in the view. It provided a glimpse of things to come as Yala province offers some of the most pristine ecotourism experiences to be found in Thailand.

From there, the drive south continued to Betong, the crown jewel of Yala that still retains its quaint small-town vibe. (Read full story at: Betong, Yala offers delights unseen in Thailand for 30 years)

There is much to do both in and around Betong, and it can easily be divided into out-of-town excursions and those which are either in and around the city centre or nearby. Depending on where one stays, the Betong Clock Tower is a great place to meet and start a half-day walking tour.

The self-proclaimed world’s largest Post Box, conveniently located at the Clock Tower intersection, once was the social meeting place and had a radio with loudspeakers perched atop the box with a slot for mail below it.

Not more than a couple of hundred metres up the road is the Betong Mongkollit Tunnel, Thailand’s first and longest tunnel when it was completed in 1999. Just above it is the Betong Museum, which offers a colourful history of the town and its importance to the region.

All of this sightseeing is sure to make any tourist on walkabout mighty hungry. It doesn’t hurt that Betong is a gastronomic hub that basks in the colourful intersection of three outstanding culinary traditions that include tasty Southern Thai cuisine, plus delicious Chinese and Muslim food.

However, its signature dish, Betong Chicken – the Hainanese style chicken rice variation that the town is famous for, is the perfect quick meal on the go. It has to be said that Betong is crazy about its chickens and after one bite it is easy to understand why. The city even erected towering statues and colourful street art celebrating its love for all things Betong chicken.

Other attractions within a short drive from town include Wat Phutthathiwas (Wat Betong), Winter Flower Garden, the Betong Hot Springs, and the former communist stronghold located at the Piyamit Tunnel.

Excursions to the Hala Bala Wildlife Sanctuary and Iyerweng Sea of Mist (and its new Skywalk opening in June 2020) are a must but require longer travel time from Betong. Both require early starts and probably are best explored on two separate days. Because of both attraction’s remoteness, booking an excursion through local tour operators is also advisable.

After a couple of days in and around Betong, the group headed north to Pattani, Thailand’s most misunderstood province after years of unrest. There certainly are more checkpoints on the road heading into Pattani city centre, but it is currently enjoying its most peaceful patch in a long time.

And the timing is perfect, as there are new things to see and do. The Pattani Skywalk, or Pattani Adventure Park, is a new landmark for tourists and an interesting option to take in the sunset.

From the Skywalk, visitors can see Pattani Bay and Tachi Cape and take in a panoramic view of Pattani city. While the Kru Se Mosque is one the province’s most famous historical and religious sites. Next door is the Chao Mae Lim Ko Nieo Shrine, which stands along Anohru Road in downtown Pattani. The statue was carved from mango wood centuries ago and adjacent to the Shrine is an interesting museum by the same name. After soaking up this fascinating bit of local history, the evening concluded with a visit to the magnificent Pattani Grand Mosque in time to catch the faithful after evening prayer.

Next stop was Songkhla, a very popular beach town on the Gulf of Thailand that is a favourite with Thai travellers and Malaysian travellers. Having said that it remains an underrated destination for international travellers, and it offers a valid alternative to the hustle and bustle of much busier beach resorts on the Andaman Sea.

The magic of this classic old town (Singora) still enthrals visitors, especially the area around the old Red Mill. From there, colourful Sino-Portuguese style of houses dot the road, and there is street art on some older walls with these murals being highly Instagramable and very popular with selfie taking visitors.

Amid the many spots for photography are quaint old shops that are in operation to this day, and tucked among them are cute coffee shops, themed restaurants, and trendy boutiques. The Songkhla Museum documents the city’s former glory as the commercial trading centre of Southern Thailand contrasting the old with the current hip café culture. Last but not least, Samila Beach remains a favourite sights for local and international visitors alike.

While travelling these provinces, international visitors might want to pinch themselves because it does feel like a discovery tour when you see so few tourists. Soon, it will hopefully be much easier to visit and discover Yala, Pattani and Songkhla when the new Betong International Airport opens in June 2020. This could open another age of discovery with more visitors poised to experience the charms of these provinces.

The views and opinions expressed in this article are those of the authors and do not necessarily reflect the official policy or position of the Tourism Authority of Thailand’s (TAT) Newsroom. The TAT Newsroom does not assume any liability for the materials, information and opinions provided on, or available through, this web page. Details provided regarding travel in Yala, Pattani and Songkhla provinces are based on the best available information when the trip took place in April 2019.

Say ‘no’ to plastic with Amazing Thai Taste Festival 2019