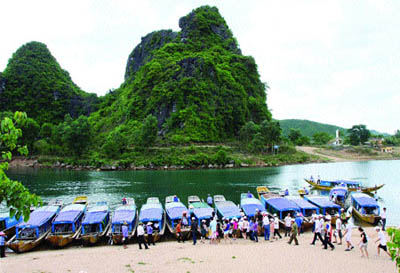 Quang Binh authorities say they will revoke business licenses of any service provider, or company, found guilty of scamming tourists.

Tuoi Tre News quoted the provincial People’s Committee chairman, Nguyen Huu Hoai, saying companies that cheat tourists will no longer be punished with administrative penalties, but will have their operations shut down permanently.

The statement was announced in response to reports that local businesses were guilty of overcharging tourists which in turn damaged the image of the province.

The tough stance on scams and cheating is part of a wider crackdown to make the province more tourist friendly.

The decision gained support from Nguyen Xuan Dat, head of the provincial Market Control Department, during a meeting of 200 local tourist firms.

Officials admit that the province has to improve its tourism by ending unhealthy competition, and by adding more entertainment for tourists.

Recently, Khanh Hoa’s Nha Trang tourism authorities were told to name and shame hotels and restaurants that cheat tourists in an effort to safeguard the destination’s image.

The website of the province’s tourism department was told to name and shame businesses that were guilty of scamming tourists, according to Khanh Hoa chairman, Le Duc Vinh.

Quang Binh province is well-known for its natural attractions, especially the ‘Kingdom of Caves’, a complex of over 300 caves,  in the Phong Nha – Ke Bang National Park, which was recognised as a World Natural Heritage Site by UNESCO in 2013.