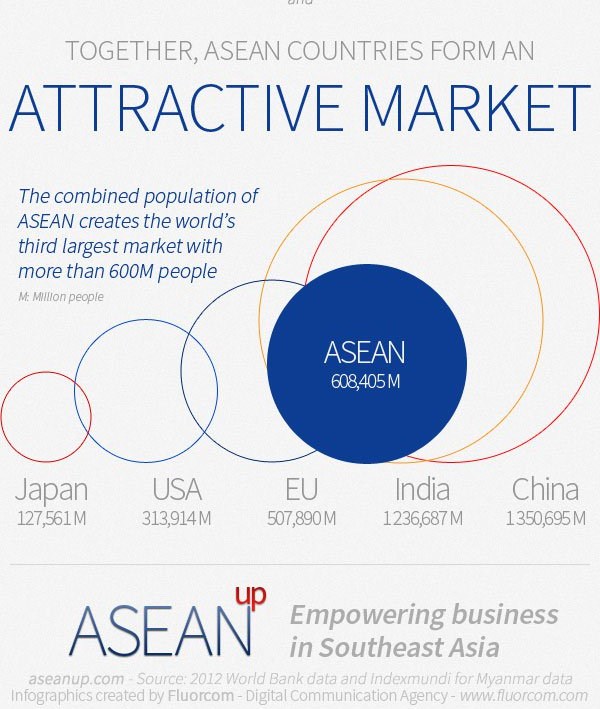 ASEAN has truly gained traction as an potentially dynamic economic entity with huge prospects for trade and investment : a regional populace of 625 million, plus the combined GDP of US$2.5 trillion.

This will undoubtedly take on greater prominence with the realisation of the ASEAN Economic Community (AEC) by the end of this year.

Undoubtedly, the AEC has created a conducive environment for local companies to increase sales, open operations outside their domestic market and enable sourcing on a region-wide basis.

Its significance by being the seventh largest economy in the world with a combined Gross Domestic Product (GDP) of US$2.5 trillion, has attracted more non-ASEAN countries to be dialogue partners with it including Bangladesh and Timor Leste.

Realising its potential back then, Australia was the first to come on board as a dialogue partner, quickly followed by China, Japan, South Korea, New Zealand, India, the United States, Russia, Canada and the European Union.

To take this significantly further, ASEAN is in talks to realise the Regional Comprehensive Partnership (RCEP) to create a highly competitive economic area with dialogue partners with which it has free trade agreements.

The regional grouping’s potential is also set to gain greater momentum with Malaysia — holding the chair for ASEAN this year, bent on driving regional transformation and powering growth through holistic platforms.

They include not only stepping up government-to-government (G-G) or business-to-business (B-B) interaction, but more importantly at the people-to-people level so citizens also gain from its plans and not just the elitists.

For Malaysia, the clarion call is for local companies to look regional, particularly with the realisation of the AEC which would expand boundaries for its workers and the country’s citizens.

If anything else, a regional populace of 625 million versus a domestic populace of 30 million plus the combined GDP of US$2.5 trillion offers opportunities under AEC.

Collectively, it has the economic power to emerge as a dynamic production base and business for global companies including creating much needed employment opportunities in the region.

Therefore, the 1,000 or so Malaysian companies which have a foothold in Asean can expand operations even further as the AEC aims to emerge as an integrated economic region encompassing regional economies.

via AEC set to transform ASEAN into economic superpower | MCOT.net.