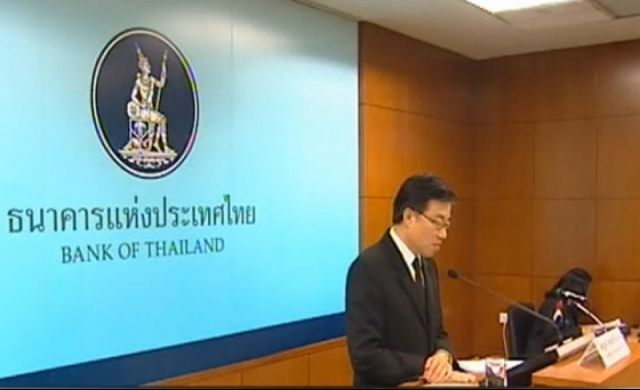 An earlier forecast of Thailand’s gross domestic product GDP growth at 4.2 per cent this year was lowered for the fourth time to 3.7 per cent, according to the Bank of Thailand BoT.

Advanced technology was minimally used in manufacturing of Thai products and emphasis was given to production of hard-disk drives though production recently switched to smart phones and tablets, he said. Production of smart phones and tablets has yet to fully cash in on the economic revival among Thailand’s trading partners, he said, adding that export value increased by only 1 per cent from an earlier estimate of 4 per cent.

Mr Paiboon said the Thai economy should grow at a more satisfactory percentage of 4.8 – slightly lower than the original projection of 5 per cent – while exports should expand at 7 per cent. He foresaw a higher trend of domestic consumption, from 2.6 per cent this year to 2.9 per cent next year, and spending for durable products would be back to normal in the second half of next year.

The country’s revenue and confidence would improve in accord with the global economy and exports, said the assistant governor who, however, expressed concern on lower-than-expected disbursement of national budget funds and investment capital. Investment spending for infrastructure projects would be delayed by a quarter and it is estimated that only half the state budget would be spent in 2014-2015, he said. Mr Paiboon said public spending under the Water Management Act would also make little progress, and disbursement would only cover urgent projects where as public referendum would be required for the government’s expenditure on long-term schemes.