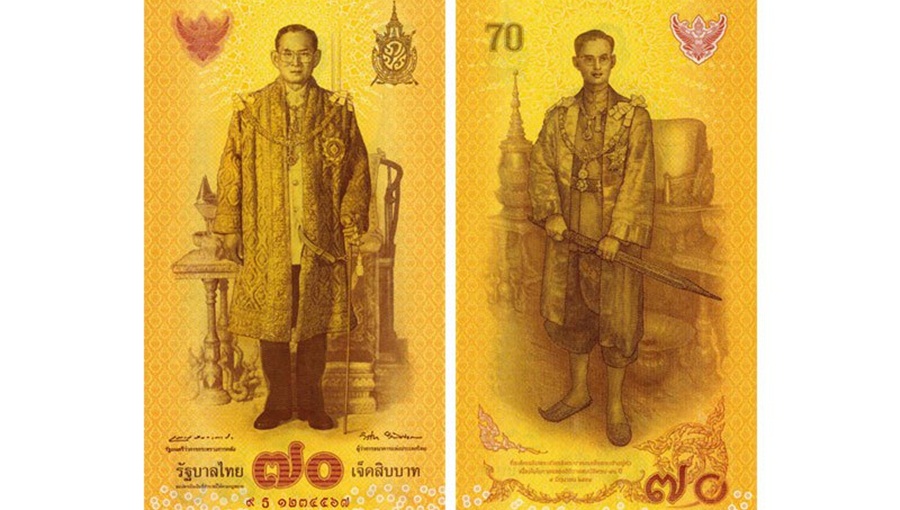 The Bank of Thailand has printed 20 million banknotes of 70-baht denomination to celebrate His Majesty the King’s 70th anniversary of accession to the throne.


Mr. Veerathai Santiprabhob, Governor of the Bank of Thailand (BOT), unveiled a 70-Baht commemorative banknote to celebrate the Seventieth Anniversary Celebrations of His Majesty’s Accession to the Throne 9th June 2016.

The BOT will issue 20 million commemorative banknotes to celebrate this auspicious occasion.

The BOT will issue 20 million commemorative banknotes to celebrate this auspicious occasion.

Central Bank governor Veerathai Santipraphob said that the new banknotes would be allocated to commercial banks for distribution to members of the public who are interested to exchange them for keeping.

He believes that 20 million notes are sufficient to meet demand and there will be no additional printing.

The portrait of H.M. the King in full regalia holding the Sword of Victory, standing in front of the Phuttan Kanchanasinghat Throne inside the Paisan Taksin Hall is illustrated on the reverse of the banknote.

The size of this 70-Baht commemorative banknote is 89 x 162 mm with major security features as follows;

1. Raised Print: On both sides, H.M. the King’s portraits printed with the intaglio printing process can easily be felt by touch.

2. Glitter Ink: Thai numeral “๗๐” on both sides will sparkle dazzlingly upon tilting.

3. Color-shifting Ink: Arabic numeral “70” on the reverse side is changed from gold to green upon tilting.

4. Latent Image: Hidden numeral “70” inside the Garuda on the front side becomes visible when the note is viewed from a certain angle.

5. Fluorescent Ink: Radial pattern behind the portrait on both sides will glow yellow under ultraviolet light.

The commemorative banknote including a leaflet can be exchanged at 100 Baht each and available at commercial banks, the Government Savings Bank, the Bank of Agriculture and Agricultural Cooperatives, the Government Housing Bank, and the Islamic Bank of Thailand from 9 June 2016 onwards.

Part of the proceeds will be presented to H.M. the King.