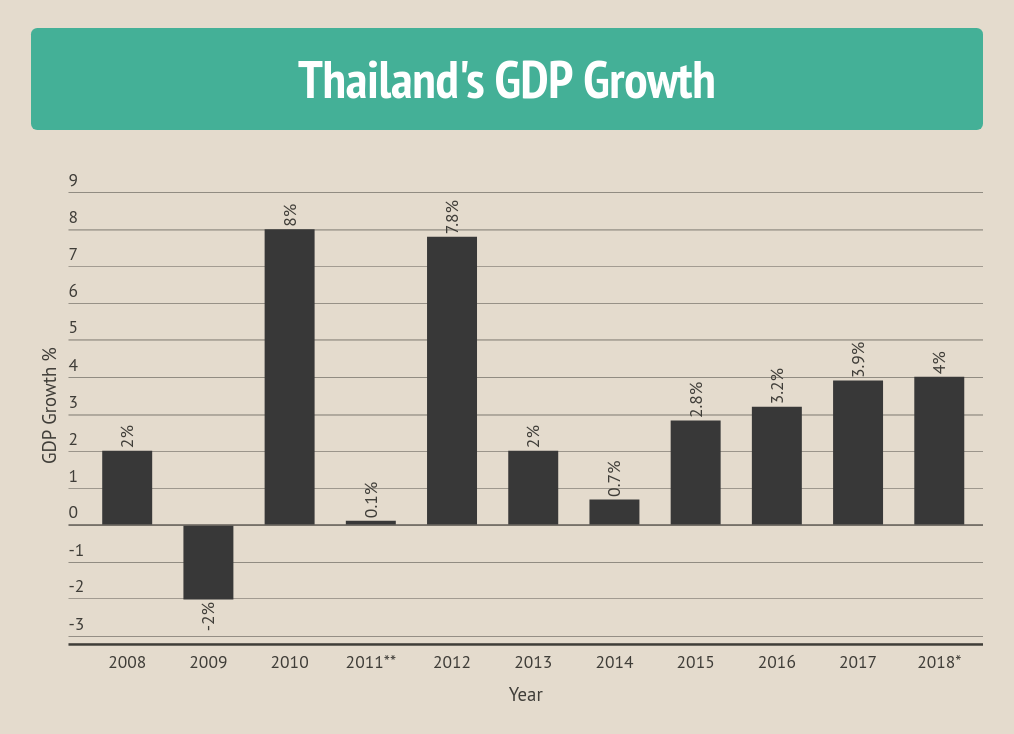 A spate of public and private positive forecasts have revised up Thailand’s GDP growth projection for 2018 to over 4 per cent.

Earlier this week the Joint Standing Committee on Commerce, Industry and Banking (JSCCIB)  increased the group’s 2018 GDP projection from growth of 3.8-4.5% to 4.0-4.5% after witnessing better sentiment over the first two months of the year.

According to Bank of Thailand latest press release, tourism registered a growth of 10.9 per cent January and 13.9 per cent in February mostly on the back of Chinese arrivals

The Joint Standing Committee on Commerce, Industry and Banking (JSCCIB) also cites the sustained recovery of the global economy and the steady gains in Thailand’s export and tourism receipts.

JSCCIB chairman Chen Namchaisiri said Thailand’s economic indicators for the first two months of 2018 show consistent expansion in overseas shipments on the back of the positive global economic conditions, as well as the tourism boom.

But the private sector has expressed concerns that public investment may not grow as forecast after contracting 6% year-on-year in the first quarter of fiscal 2018 (October-December 2017).

Others economic forecasters have also revise up the country’s economy growth projections thanks to public investment along with the robust export and tourism sectors.

Kasikorn Research Centre (Kresearch) is sticking with a forecast of 4.5 per cent export growth, amid concerns over a trade war. It estimates economic growth of 4 per cent for this year, shading earlier estimates.

The SCB Economic Intelligence Centre (EIC) has pencilled in economic growth of 4 per cent for this year, up from an earlier estimate.

EIC expects the Thai economy to continue expanding at 4.0%YOY in 2018, but the concentration of growth as in Q4/2017 is likely to remain. Given the stronger outlook of the global economy and declining risks of economic slowdown in major economies, Thailand’s merchandise exports and tourism will likely remain key growth drivers this year.

The centre, a unit of Siam Commercial Bank, said exports and the number of tourist arrivals are projected to see year-on-year expansion of 5 per cent and 8 per cent, respectively.