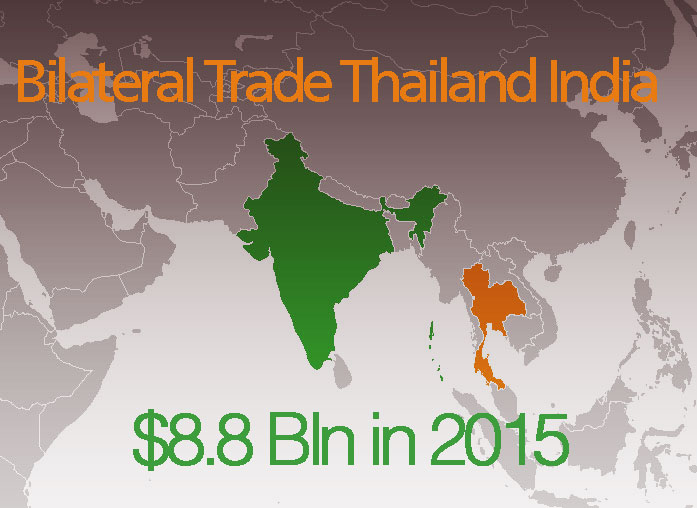 Thailand today sought more investment from Indian companies as it looks to increase the volume of bilateral trade and position itself as a regional logistics hub.

“We are a leading economy in Asean region and invite Indian companies to invest for our growth.

“Nearly USD 200 million has been invested by Indian companies in the last two years and Thailand has positioned itself as a regional logistics hub for Indian companies to help them cater to the needs of Asean countries,” Consul of Commercial Affairs at Royal Thai Consulate-General, Mumbai, Suwimol Tilokruangchai, told reporters here.

The two countries have a partial FTA with 83 items being traded at present, Consulate officials said.

Bilateral trade is growing at a “tremendous” rate and stood at USD 8,815 million in 2015, Tilokruangchai said. The total trade between India and Asean countries in 2015 was worth USD 6.8 billion.

In the ASEAN region, Thailand ranks as India’s 4th largest trading partner after Singapore, Indonesia and Malaysia. The growing ties between the two countries have come at a time when the AEC is expected to bring greater integration among member countries be it in the form of physical connectivity, economic links, cultural and educational ties

India continues to remain an interesting market for export of goods from Thailand.Currently, Thai goods have benefited from tax reduction under ASEAN-India FTA in Goods, which came into effect from 01 January, 2010 and resulted to the flow of more goods into Indian market. An Early Harvest Scheme (EHS), covering 82 products (now 83 products) under the proposed India-Thailand FTA, in place since September 2004, has already resulted in phenomenal growth in our bilateral trade.

Thailand views India as the gateway to South Asia and beyond.As a result of the reduced tariff rates and new initiatives adopted by both the countries, trade between two countries increased manifold in recent years.

Bilateral Trade has multiplied eight times since 2000 to reach US$ 8.66 billion in 2014. Trade figures between the two countries are as under:
(amount in billion USD)

While China’s biggest corporates are increasingly flexing their global muscle as the country’s economic and geopolitical influence accelerates, Bangkok is the 10th most popular destination for mainland firms expanding overseas. END_OF_DOCUMENT_TOKEN_TO_BE_REPLACED

With its strategic location in the center of ASEAN with emerging markets, including Cambodia, Laos, Myanmar, Malaysia and southern China, on its border, Thailand is well position to connect investors to new opportunities arising from the increasing border trade and the region’s rapid economic growth.
END_OF_DOCUMENT_TOKEN_TO_BE_REPLACED

Twenty years ago, day trading was the great new pastime for Americans, all of them tuned to the financial news and reports on the day’s newest crop of IPOs. END_OF_DOCUMENT_TOKEN_TO_BE_REPLACED