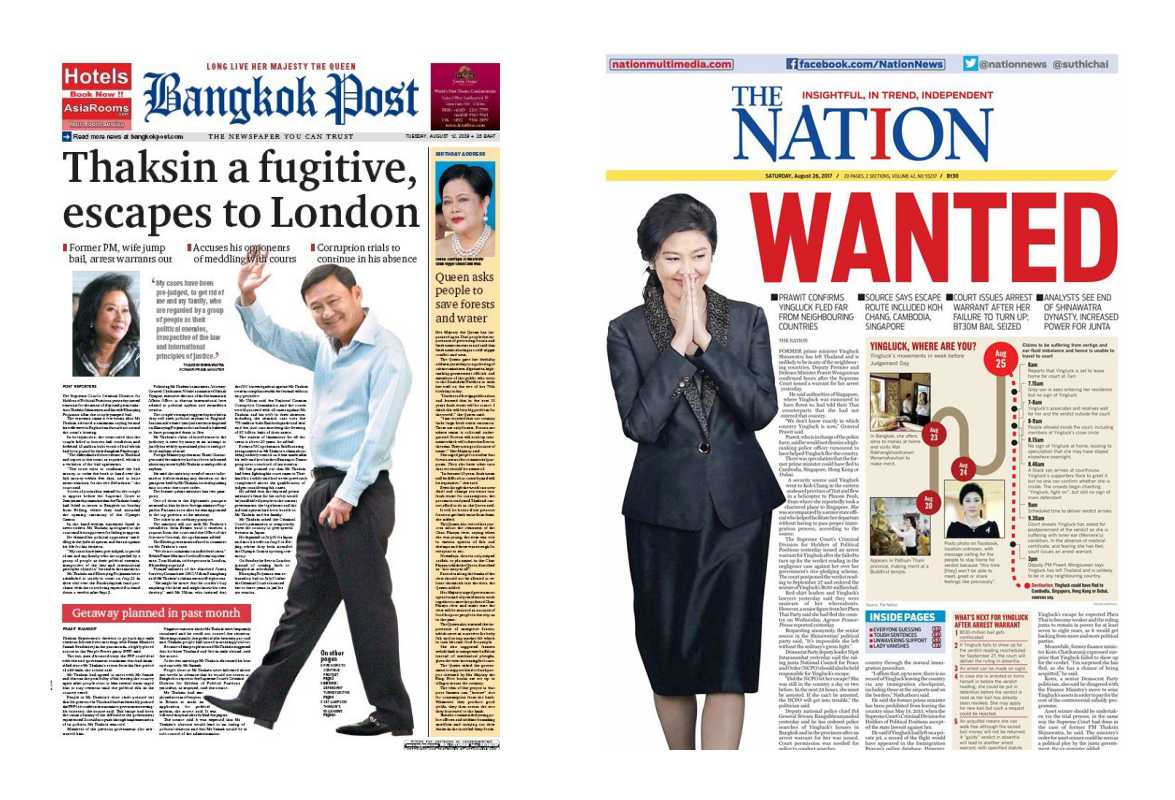 If you liked  “The Shinawatra Season One”, then you’ll love “The Shinawatra Season Two”. Simply put, it has almost exactly the same old fashioned enduring Thai plot : a populist government with money spending and elite pissing bad habit, a military coup, a sloppy trial and in the end the flight abroad of the main defendant.

“History repeats itself, first as tragedy, second as farce.” Karl Marx once said,  although he had never lived in Thailand.

Honestly the story writers of the HBNCPO channel could have done a better job for this much awaited sequel.

“The Shinawatra  2” is hardly a decent imitation of “The Shinawatra 1” with a touch of “Game of Thrones” and “Breaking bad”. Except for the happy ending maybe: bro and sis reunite happy together in Dubai. Seriously ?

Like Marx also said (Groucho the younger brother of Karl) “Learn from the mistakes of others. You can never live long enough to make them all yourself.”

In this picture yinngluck Shinawatra is seen fleeing Thailand for Koh Chang (Cambodia) with an unidentified accomplice.

I won’t elaborate to much on the “Games of Thrones” resemblance, just to be on the safe side… See what I mean. After all, I still do enjoy my lifestyle in Thailand, and you never know who is reading this, especially when you live in a country where a wrong “like” on Facebook can send you 10 years behind the bars.

But for the “Breaking bad” vibe, it makes it so obvious that the Yingluck Shinawatra fate was sealed from the beginning.

Yes it has been a while since the Thai immigration team has been pushing its new mantra : “good guys in, bad guys out ! “

There it is the hidden message for the Shinawatra! Elementary, dear Watson

If you didn’t, Yingluck got the message

By the way these guys in brown are now getting serious about doing their job and nailing the bad tempered, trouble making and ill-intentioned farang that you are, so it is time to keep your visa, work permit and 90 days paperwork up to date and in order.

Unless you have a private jet waiting for you to leave the country discreeeeeeeeeetly of course.

While China’s biggest corporates are increasingly flexing their global muscle as the country’s economic and geopolitical influence accelerates, Bangkok is the 10th most popular destination for mainland firms expanding overseas. END_OF_DOCUMENT_TOKEN_TO_BE_REPLACED

With its strategic location in the center of ASEAN with emerging markets, including Cambodia, Laos, Myanmar, Malaysia and southern China, on its border, Thailand is well position to connect investors to new opportunities arising from the increasing border trade and the region’s rapid economic growth.
END_OF_DOCUMENT_TOKEN_TO_BE_REPLACED

Twenty years ago, day trading was the great new pastime for Americans, all of them tuned to the financial news and reports on the day’s newest crop of IPOs. END_OF_DOCUMENT_TOKEN_TO_BE_REPLACED