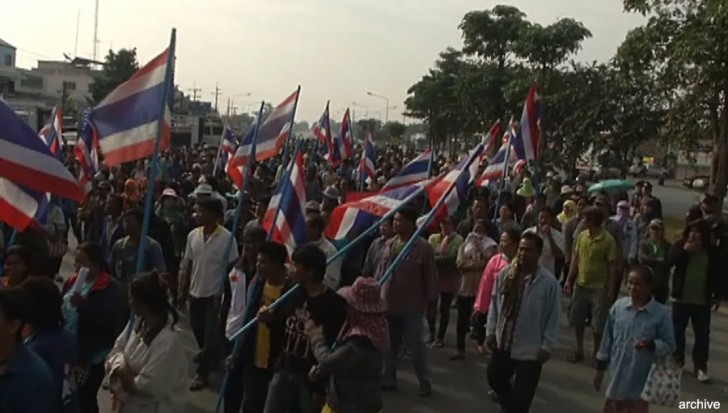 Rice farmers in five northern and central provinces threatened to block the Asian highway from Phitsanulok to Nakhon Sawan in what they said is to pressure the government to pay for the rice they sold under the rice-pledging scheme. Farmers said they have not been paid for over five months now.

Farmers said they had sold rice under the scheme for over four months, and were not yet paid

Farmers from Phichit, Phitsanulok, Nakhon Sawan, Kamphaeng Phet,  and Sukhothai are now heading for the Asian Highway at Pluek Soong intersection in  Wachirabaramee  district of Phichit in their plan to block the highway if their demand for immediate rice payment was not met with.

Earlier yesterday in Phetchabun province, more than 300 farmers gathered at the town hall to demand payment for the rice they pledged under the 2012/2013 crop year.

They said they had sold rice under the scheme for over four months, and were not yet paid, thus causing them in financial trouble and hardship. They said they have no money to pay back debts.They later dispersed when the executive of the Bank for Agriculture and Agricultural Cooperatives said they would get their money within March as the money is allocated by the government in allotments.

But they also vowed to join protest by their colleagues today.Commerce Minister Niwatthamrong Boonsongpaisan yesterday vowed to pay farmers within this month, though earlier last year his deputy Yanyong Puangrat promised that all unpaid farmers would be paid by January 15.The government had plans to draw cash from BAAC’s deposits to pay for the rice but this was against the bank’s regulation and against the Election Law.