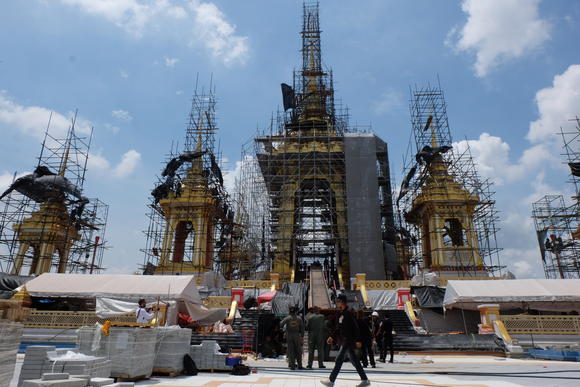 Although nearly a year has passed since the revered monarch’s death, his presence is still strongly felt, and the grand cremation ceremony on Oct. 25-29 will draw thousands of Thais to Bangkok from around the country.

All preparations for the royal cremation of the late King Bhumibol Adulyadej, including the construction of the crematorium and the decoration of the cremation ground, will be completed by the end of September, Deputy Prime Minister Tanasak Patimapragorn said on Monday (Sept 11).

Gen Tanasak said that a special religious ceremony to consecrate the chariots to be used in the procession of the royal urn will be held at the National Museum on Sept 21, at 2pm.

The ceremony will be chaired by Prime Minister Prayut Chan-o-cha.

The Bangkok Metropolitan Administration will install large television monitors around Sanam Luang, the cremation ground, for the people to watch all ceremonies to be held between Oct 25-30.

The cremation day will be October 26

Some analysts are anticipating a period of relative calm in the country’s tumultuous political scene as the nation turns its attention to the event.

The ceremony’s main stage will be at Sanam Luang, a large park in front of the Royal Palace that is rapidly being turned into a cremation complex. More than 10 buildings — small and large — have been built, each for different purposes from Buddhist merit-making rituals to serving food.

Sitting in the center of the complex, which is larger than 30,000 sq. meters, is the golden crematorium. The square structure measures 60 by 60 meters at the base and is 50 meters high, surrounded by water in recognition of the king’s contribution on the country’s water management system.

On Oct. 26, a coffin carrying Bhumibol’s body, which still lies in the Royal Palace, will be brought here and elevated to the top platform of the crematorium to be incinerated in an electric oven.

Thai Government to Work without Disruption during National Mourning