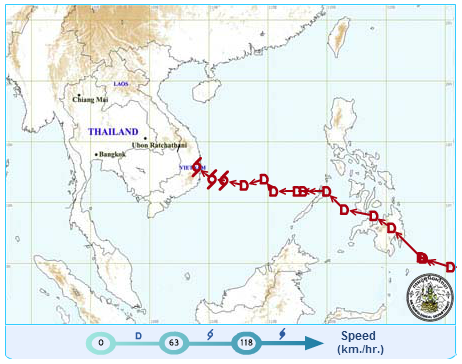 At 04.00 a.m. on 15 November, the tropical depression in the lower South China Sea which upgrade to tropical storm and lay centered about 300 kilometers east of Ho Chi Minh City, Vietnam or at latitude 12.0 degree north and longitude 110.0 degree east with maximum sustained winds about 65 km/hr. The storm was moving west at speed 20 km/hr.

It is forecast to move across southern Vietnam in the morning today and downgrade with move pass Cambodia and cover the East, the Gulf and the upper South of Thailand during 16-17 November.

Tropical storm Podul is forecast to move across southern Vietnam in the morning today and downgrade with move pass Cambodia and cover the East, the Gulf and the upper South of Thailand during 16-17 November

More rain and isolated heavy rain are expected in the lower Northeast, the East, the Central and the upper South, the areas include Rayong, Chanthaburi, Trat, Ratchaburi, Phetchaburi and Prachuap Khiri Khan. The stronger wind wave 2-3 meters high is likely in the upper Gulf of Thailand. Small ships keep ashore during the period.

Natural Disasters  in 2011 : a retrospective vision of worst year in Thai weather

In 2011, several severe natural disasters had taken place in Thailand, particularly since March onwards. The typical weather in March when the hot season is dominant throughout the country had generally been hot and humid with scarce rainfalls. But in March 2011, a cold snap together with occasional rainfalls occurred in upper Thailand almost the whole month. High-pressure areas extending their ridges from China to cover upper Thailand periodically were found to be the causes of such phenomenon.

Also in March 2011, an active low pressure cell covered the middle part of the Southern Region and caused intense rainfalls almost the whole period. Incessantly heavy and very heavy rainfalls observed in many areas caused unprecedentedly severe flash floods over huge areas of the majority of the southern provinces : Chumphon, Surat Thani, Nakhon Si Thammarat, Songkhla, Patthalung, Narathiwat, Yala, Trang, Phang Nga, Krabi, and Satun. In addition, both landslides and mudslides were also reported in Chumphon, Surat Thani, Trang, and Krabi. The total amount of monthly rainfalls countrywide last March was the highest one for the last 36 years (1974 – 2010). Besides, new highest amounts of 24 hours rainfalls as well as new lowest minimum daily temperatures were recorded in several areas during such period too. Consequently, these situations were considered very unusual, compared to what had normally occurred.

Followed by the rainy season, intermittent rainfalls were observed in several areas of Thailand.

The rain quantity throughout this season was 40-50% higher than the normal value. Although limited rain at the beginning of the season was reported in some certain areas, there were no dry spells like what had usually taken place in Thailand. Additionally, excessive rain was reported in upper Thailand, especially in the Northern and the Northeastern Regions. The Southwest Monsoon, low pressure troughs, and some certain tropical cyclones moving through or approaching the country were the causes of these situations.

On June 24th, the tropical storm “HAIMA” had made landfall in the upper part of Vietnam before it was weakened to be a depression. It was disintegrated and became an active low pressure cell on the 26th while moving across Laos. Afterward, it had made its way to be above Nan Province, Thailand before it completely decayed on the same day. This storm caused incessantly heavy and very heavy rainfalls in upper Thailand, particularly in several northern provinces. The amount of daily rainfalls of 335.2 mm., measured at Doi Phu Kha National Park in Pua District, Nan Province on June 25th was a consequence of this storm and also the new highest, compared with those recorded in the same month of previous years.

Furthermore, flash floods, downhill overflows, and landslides were experienced in some northern provinces: Prae, Chiang Rai, Phayao, Nan, Tak, and Sukhothai. 3 dead people, 411,573 people from affected 105,703 families, and 63,839 acres of damaged agricultural areas were reported as the effects of these natural disasters. (Source: The Department of Disaster Prevention and Mitigation, Thailand, June 4th, 2011).

By the end of last July, Thailand was affected once again by the tropical storm “NOK-TEN”. It had made landfall in the upper part of Vietnam before moving across Laos and turning into a depression. On July 31st, this depression had entered Thailand via Nan Province before it became a low pressure cell, covering over Chiang Mai and Mae Hong Son in the Northern Region of the country. Moreover, it induced pluvial rainfalls, with heavy and very heavy rainfalls in some certain locations nationwide.

In the Northern Region and the upper part of the Northeastern Region, heavy and very heavy rainfalls were also observed. The new highest amount of 24 hrs. rainfall was reported as 405.9 mm. from Muang District, Nongkhai Province on July 30th. Such value was the highest one for Nongkhai Province in 2011 too.

Flash floods were reported in many provinces : Mae Hon Son, Nan, Prae, Uttaradit, Phitsanulok, Phichit, Nongkhai, Loei, Udon Thani, Sakonnakhon, and Nakhon Phanom. Despite no approaching storms last August, Thailand was still influenced by the Southwest Monsoon as well as a slightly active low pressure trough that lay above upper Thailand. As the result, abundant rainfalls had taken place almost the whole month. Both heavy and very heavy rainfalls in the Northern Region and the Northeastern Region led to persistent flash floods in several places. In case of September, not only the Southwest Monsoon and a low pressure trough but another 2 tropical cyclones were also casted their effects over Thailand.

The tropical storm “HAITANG” made landfall in Hue, Vietnam on September 27th. It had turned into a depression before crossing Laos and was further weakened to be an active low pressure cell which covered northeastern and northern Thailand on the 28th of the same month. For the other storm, the typhoon “NESAT” had moved through the Gulf of Tonkin before making landfall in Halong, Vietnam as a tropical storm on September 30th. The Impacts of both tropical cyclones could be seen in forms of abundant rainfalls, together with occasionally heavy and very heavy ones, in the upper Thailand. Huge flash floods had been continuously reported in many locations, even those with no flood records.

The enormous damages from the floods affected all sectors as well as the overall economy of the country.

Having evaluated the damages caused by the flash floods occurring throughout the country, the Governor of the Bank of Thailand anticipated that the total economic losses could be more than 20 thousand million Baht unless the flood period continued beyond November, 2011. Or else, the losses would surpass the estimated value (Source: Post Today, October 6th 2011). According to the amounts of rainfalls collected from different areas in Thailand during the first 9 months of 2011, it was found that the total accumulated rainwater nationwide was approximately 32 % higher than the normal value. The same data taken in 1953 and 1970 (ranked as the second and the third places) were 27 % and 23 % higher than normal, respectively.

All natural disasters mentioned above had occurred during the first 9 moths of 2011 only. For the rest of the year, flash floods still need to be under incessant surveillance as the amounts of rainwater countrywide during then had been expected to be exceeding the normal values. Though the natural disasters in many areas in 2011 are considered the worst ever since the records have been started, they are taken as a lesson for the related governmental units to apply in their future preparedness, adaptation, and planning procedures for the sake of human safety and well-being.