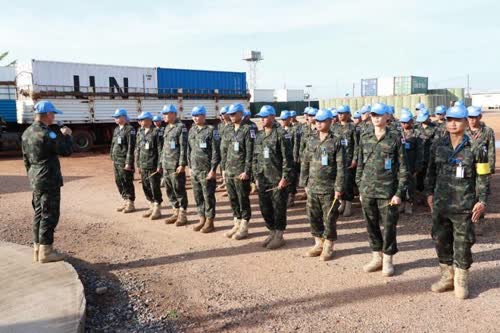 BANGKOK, 1 July 2019(NNT) – The first batch of Thai army engineers dispatched to Sudan under the U.N. Mission in South Sudan (UNMISS) has contributed impressively over the past six months.

The Royal Thai Army (RTA) is now preparing to dispatch a new batch of the Thai Horizontal Military Engineering Company to replace the first group if the UN requests it.

The government earlier assigned the RTA to dispatch members of the Thai Horizontal Military Engineering Company to participate in the peace mission on behalf of the United Nations (UN) in South Sudan. The operation started in December 2018 and has continued this year.

Their work performance and living conditions are continually reported to Thailand via a remote video system. They are always ready to perform their mission as best as they can in the good name of Thailand.

The first group of members of the Thai Horizontal Military Engineering Company will remain stationed in that country for a year, while the RTP is preparing a second group which will leave for Sudan if the UN asks Thailand to continue the mission.