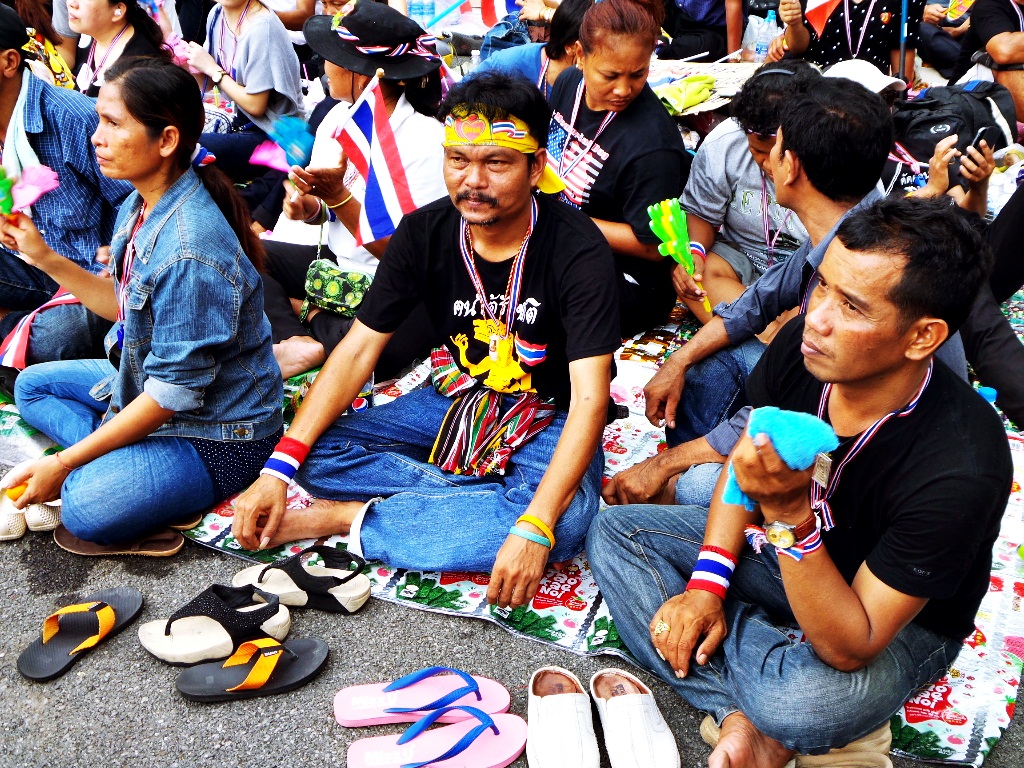 You know what, at the end of the day I have come to believe it might be a be a better option to have the real guy in command, instead of one of  his family copycat or self branded clone.
If we are going to live another 15 years of Thaksin branded politics, at least  give us the whole shebang, not a mere Skype driven avatar.
Let’s face it : the Democrats are too polite and clean looking to win an election any time soon in Thailand. Winning a street fight is not option either : with all due respect, Suthep is not in the same league as Jatuporn : he essentially lacks the basic mussolinian touch to call a reasonably indoctrinated crowd to burn down Bangkok.

This may be because he is supposed to be …… eeeeeeeeer a democrat, isn’t he ?

That put together with the fact that if Thaksin’s driver would run for Prime minister, we would probably win the election (don’t laugh, we already had the step brother and the sister, and the siblings are rumored to resettle in S’Pore), I believe we should consider having the Big Boss back home.

Thailand’s time loop has to come to an end

It is not that I care about Thailand future at all, I’m just a stupid farang after all, and will be forever so I have been told. But as journalist I’m just bored stiff with this continuous “Groundhog Day” we have been experiencing for the last seven year in the country of smile.

For those of you who don’t happen to know this underestimated 90’s movie masterpiece, it portraits a perfect nightmare for a reporter. The hilarious and young Bill Murray plays Phil Connors, an arrogant and egocentric TV weatherman who, during a hated assignment covering the annual Groundhog Day event in Punxsutawney (the equivalent would be Nakhon Nowhere in Thailand), finds himself in a time loop, repeating the same day again and again. After indulging in hedonism and numerous suicide attempts, he begins to re-examine his life and priorities.

Well in my opinion the story pretty much sums up Thailand political situation, except maybe for the life priorities reassessment. Yes it is a news nightmare having to write and comment the same story again and again about the reds, yellow, blue (here you can choose your favourite color) shirts taking the streets and asking for the elected government to resign.

My two satang piece of advice

So today I say it loud and clear : enough of this endless shenanigan and I dare to give you my two satang piece of advice. At all cost bring the con home and give him his money back. It is only over a billion bucks or so, a real bargain compared to the damages done buy rice pledging, first car and other nonsense populist policies.

Oh!  by the way, I forgot to tell you I’m French. Thus I enjoy a lifetime automatic historical licence renewal to give worldwide advice to everybody, in every countries at all time. And mind you, especially in Thailand because we have a lot in common : we both share some idiosyncrasies (and this doesn’t mean we are all idiots).

First of all, we both have the best cuisine in the world : this is not negotiable. Second, we both consistently rank very close to the bottom line, when testing our English speaking capabilities.
That being said, I never thought my son (currently studying in grade 8) could ever become a better English speaker than an elected Prime Minister, but that another story.

Back to the point : bring Thaksin home at all cost and let’s reboot the whole political shmooze once for all. In French, a friendly way of putting that will be “Thaksin viens prendre un coup à la maison” , but I’m afraid  this idiomatic welcome formula could be somehow misinterpreted.

Ps : prendre un coup = familiar for have a drink, nothing to do to with tanks in the street.

The Thai baht rose to 33.94 baht per USD, a record high in the past two years after the Bank of Thailand (BOT) decided not to take measures to stop the rise of the domestic currency. END_OF_DOCUMENT_TOKEN_TO_BE_REPLACED