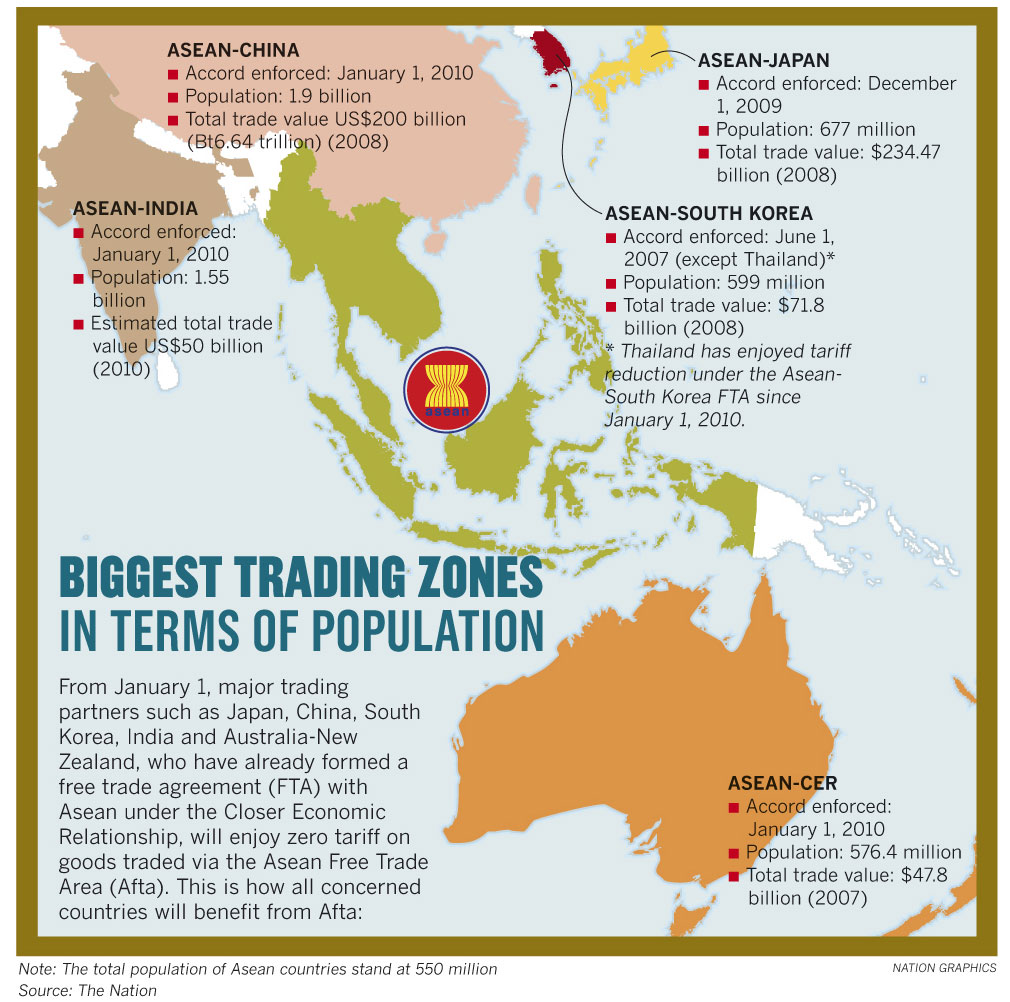 While Thailand is pushing ahead with efforts to expand its network of free trade agreements (FTAs), the lack of a permanent government means that approval and implementation of any deals could be delayed.

Thai officials have played down concerns that the political situation, which may not see a new government installed until at least June, will slow the formalising of a series of bilateral and multilateral FTAs, saying that progress is being made in talks to further liberalise trade ties and open up markets for Thai goods and services.

On March 11, Srirat Rastapana, permanent secretary at the Commerce Ministry, said progress on the new FTAs was continuing on schedule, aided by the fact that all of Thailand’s political parties support moves to liberalise trade. Despite still waiting for a new government to be formed, the various state agencies involved in advancing FTA negotiations would continue their work, she said.

“Although the political problem remains, we are still functioning. All political parties have a certain direction, and all of them aim to promote the country’s economy,”

According to the permanent secretary, negotiations on both the Trans-Pacific Partnership – which Thailand has yet to formally sign on for – and a Thailand-EU FTA should be completed next year, along with finalising the trade requirements for the launch of the ASEAN Economic Community.

Parallel to these broad-spectrum FTAs, Thailand has a number of bilateral FTAs in the pipeline, which will complement the six trade deals it already has with Japan, Australia, New Zealand, Peru, China and Chile. In early March, Minister of External Affairs Salman Khurshid said an FTA with India was close to being finalised, with an agreement to be signed once a new government is in office.

According to Indian forecasts, trade and investment between the two countries could grow by up to 40% a year once the FTA is in place, while Thai officials have said bilateral trade volumes may reach $16bn by 2015, nearly double the 2012 figure. Meanwhile, Thailand and Pakistan have held extended informal talks towards lowering trade barriers between the two countries.

Though some in Thailand have raised concerns that the liberalisation of trade could see the domestic economy swamped by imports and foreign investors taking up a substantial stake in local businesses, officials have been at pains to respond to such concerns.

Late last year, Jintana Chaiyawonnagal, deputy director-general of the Trade Negotiations Department, said of the forthcoming pact with India that Thai enterprises should not be worried about the liberalisation of foreign investment rules between the two countries. Local companies have a strong competitive edge at home, while Thai businesses are competent in the areas of the Indian economy to be opened up, including the tourism, hotel, restaurant, meeting, entertainment, legal, construction and hospital sectors, she said.

Although some local businesses may benefit from a short-term postponement of the lowering of trade barriers, the overriding concern appears to be that continued political uncertainty will delay improved access to foreign markets.

“If the political situation is prolonged, the country’s competitiveness in terms of product prices will be affected, since we cannot make any new FTA deals while there is an absence of a permanent government,”

Caretaker Prime Minister Yingluck Shinawatra also weighed in on the matter of the interruption to FTA negotiations between Thailand and the EU, warning on March 6 that extended delays could harm the national economy.

Brussels is set to remove Thailand from the list of countries that benefits from its Generalised System of Preferences, she said, pointing out that an FTA is Thailand’s “best option” to penetrate the EU market once the preferential tariffs come to an end. Among the products expected to be affected by the end of Thailand’s GSP status are pineapples, pineapple juice, dog food and shrimp.