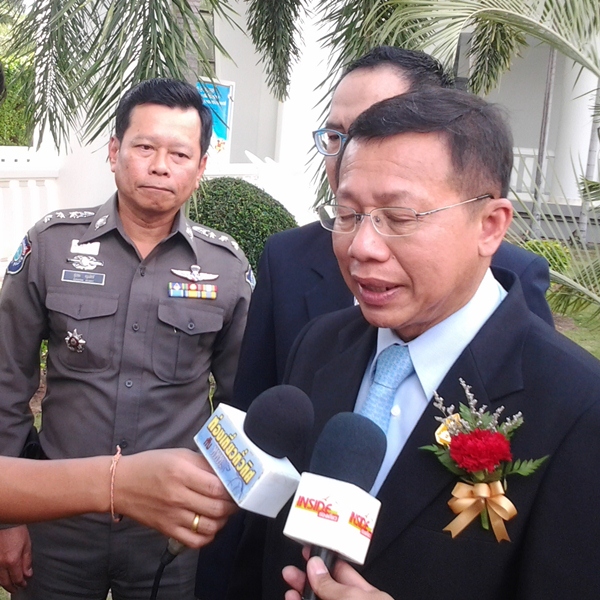 Responding to rising incidents in crime against holidaymakers, the Ministry of Tourism and Sports and the Ministry of Justice have opened a first tourism court in Pattaya to specially handle tourism-related cases.

The fact that Thai authorities have chosen Pattaya to open the first tourism court is no coincidence : the beach resort located 150 km southeast of Bangkok has become over the last decade a magnet for mass  tourism totalling an impressive 9.4 million visitors in 2012, an increase of 4.6% over year 2011. Among them a large share coming from Thailand’s so called new market, India, Russia and China.

Minister of Tourism and Sports Somsak Pureesrisak answers question of the press during the opening of Pattaya tourism court. Deputy chief police officer of Pattaya Arun Supaporn standing at his right.

Minister of Tourism and Sports Somsak Pureesrisak said that the tourism court would expedite the judicial process for foreign visitors who often stay in Thailand for a short period. More courts are planned to open in the future in other tourist areas such as Phuket, Chiang Mai, Samui, Krabi and Bangkok (2).

Pattaya is also well known for a number of typical tourist scam including the jet ski overcharging insurance or minor damages. Pattaya taxi drivers are also renowned to be notoriously allergic to taxi meter, making it difficult to move around for a recent landed traveller.

Most of the cases with tourist are related to accidents and consumer protection, this is why we need to have a shorter time to handle this cases in our justice system. Once the court is set up, it will reduce pending tourism cases and shorten court time. International tourists who stay in Thailand for just a short period will receive the benefit of justice when they are victims and will not have to return for a court hearing.

The proposed tourism court will provide better protection for tourists who may receive unfair treatment from tour agencies. Robbery and crime against foreign tourists and other cases involving tourists will be dealt with by this court, which is expected to help increase confidence in Thailand among international visitors.

The move comes in response to rising incidents in crime against holidaymakers. According to a report prepared by the Overseas Security Advisory Council in the US, crimes such as pick-pocketing, purse-snatching and credit card fraud are becoming increasingly common. The new section responsible for tourism-related cases will open from 4.30 PM to 8.30 PM.

Mr. Somsak said that safety and security for tourists was one of his priorities. He believed that Thailand would achieve its target of 24 million tourist arrivals in 2013.

If tourist-related cases can be resolved quickly and fairly, it will create a good image for the country’s justice system. Such cases create unnecessary problems for Thai tourism because they get media coverage and damage the image of the entire industry.

AEC in 2015 will bring even more tourist to Thailand so we have to get ready. A number of Thai students are now being sent to France to learn the French judiciary system and bring improvement to the Thai system.

Thailand achieved record-breaking tourist arrivals for the first time in 2012, with 22 million visitors, surpassing the set target. The number represented an increase of 15.98 percent over 2011. East Asian visitor arrivals to Thailand comprise the biggest market share of all visitors.

The Government is stepping up efforts to increase Thailand’s tourism revenue to two trillion baht in 2015. Five tourism strategies have been worked out to achieve the revenue target. They seek to make a difference in Thailand’s tourism, boost international markets, stimulate domestic tourism, promote travel through world mega-events, and encourage travel through the meeting, incentive, convention, and exhibition, or MICE, business.

In recent years, the Tourism Authority of Thailand has actively promoted Thailand as a high-quality destination, targeting new markets and offering new niche products, such as health and medical tourism, agro-tourism, Thai cookery courses, and international conventions and exhibitions.

Tourism continues to play a crucial role in Thailand’s socio-economic development, accounting for about 7 percent of GDP. It is a major source of foreign exchange, investment, employment generation, wages, and government revenue.