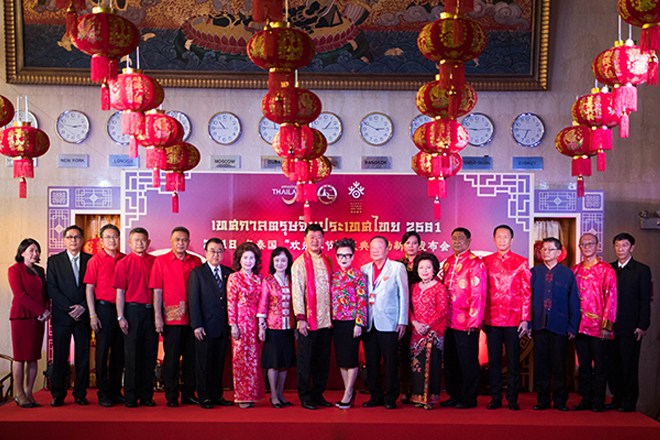 The lunar New Year celebrations will be held from 13-23 February, 2018, with an exciting lineup of events for both locals and visitors to enjoy.

Mr. Yuthasak Supasorn, TAT Governor said, “With millions of Thais of Chinese descent, Chinese New Year has always been a time to celebrate with the family and togetherness across Thailand. This year, locals and international visitors are invited to join in 13 major official celebrations nationwide, each of which is home to large, established Chinese communities,with spectacular food and cultural performances taking centre stage.

Highlights of the celebrations include a New Year greeting ceremony held with high-level ministers on 15 February, to further strengthen the strong relationship between Thailand and China. The ceremony will take place at the China Cultural Centre, and will be led by H.E. Mr. Weerasak Kowsurat, Minister of Tourism and Sports, and H.E. Mr. Yang Zhijin, Deputy Minister of Culture from the People’s Republic of China.

Locals and international visitors can also enjoy a celebration of food culture. Fresh from cooking at the recent G20 Summit in Hangzhou, a renowned Zhejiang province chef from the World Federation of China Catering Industry will be on hand to create Southern Chinese delicacies that are fused with flavours familiar to Thai palates.

A cooking demonstration will also be held to mark the beginning of the Chinese New Year, when families traditionally gather to enjoy food and being together.

Official Chinese New Year celebrations supported by TAT will be held in the following destinations: