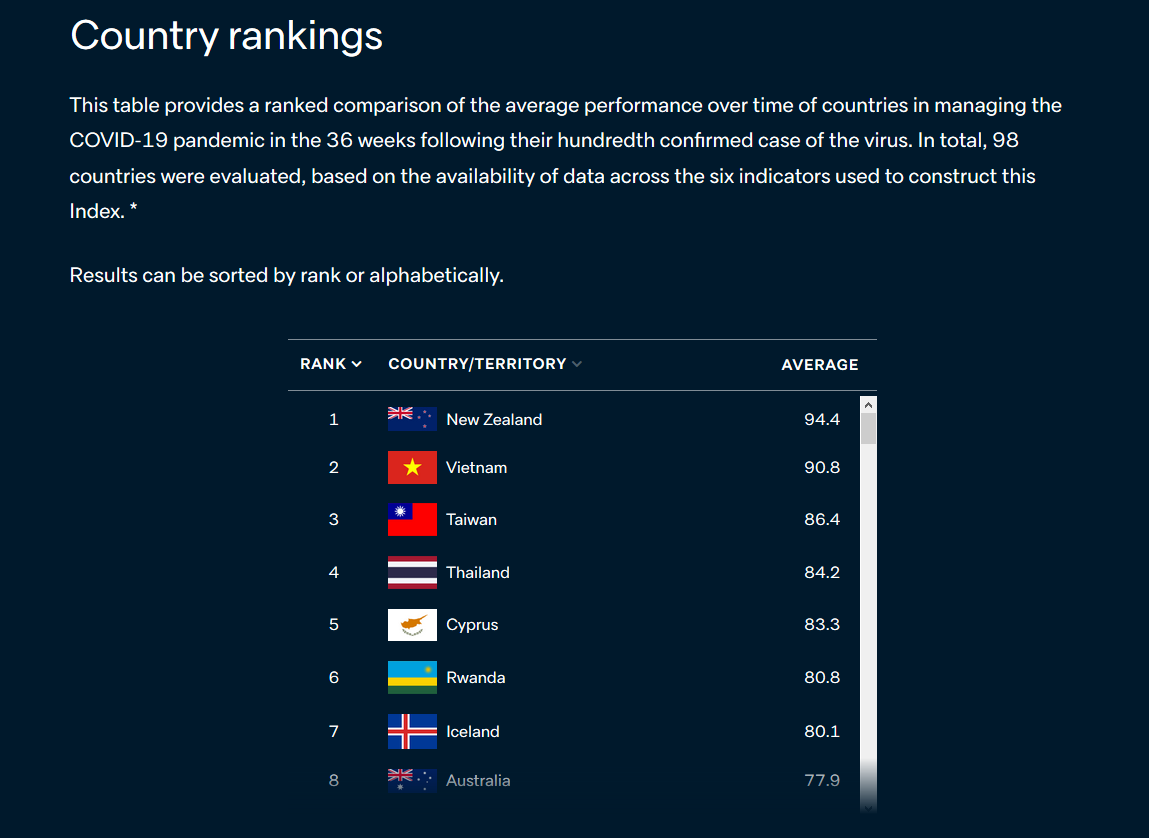 The Tourism Authority of Thailand (TAT) is pleased to report that Thailand has been ranked fourth out of 98 countries worldwide for its response to the COVID-19 pandemic in a poll conducted by a prominent Australian-based academic think tank.

Lowy Institute Interactive explores how almost 100 countries with publicly available and comparable data on the virus have managed the pandemic to date following their hundredth confirmed case of COVID-19. Countries have been sorted into broad categories — by regions, political systems, population size, and economic development — to determine whether significant variations exist between different types of states in the handling of the pandemic.

Some countries have managed the pandemic better than others – but most countries outcompeted each other only by degrees of underperformance.

The severity of the pandemic in many countries has also changed significantly over time, with infections surging again in many places that had apparent success in suppressing initial outbreaks.

It used a unique set of research criteria to reach that assessment. To gauge the relative performance of countries at different points in the pandemic, the Lowy Institute tracked six measures of COVID-19 in 98 countries where a complete data set was available.

It looked at the individual response in the 36-week span that followed every country’s 100th confirmed case of the virus, using data up until 9 January, 2021. From that, it created 14-day rolling averages that were calculated using the following indicators:

It judged countries that had fewer reported cases and deaths (on both an aggregate and per capita basis), in addition to nations where testing rates were high, countries that proved more successful in containing the virus were largely in the Asia-Pacific region.

Although the coronavirus outbreak started in China, countries in the Asia–Pacific, on average, proved the most successful at containing the pandemic. By contrast, the rapid spread of COVID-19 along the main arteries of globalisation quickly overwhelmed first Europe and then the United States. However, Europe also registered the greatest improvement over time of any region — with most countries there at one point exceeding the average performance of countries in the Asia–Pacific — before succumbing to a second, more severe, wave of the pandemic in the final months of 2020.

This latest recognition of the Thai government’s prevention and control of the ongoing COVID-19 pandemic comes as Thailand continues to work to control a stage two outbreak that began on 19 December, 2020.

In August last year, Thailand also topped the list of the world’s safest destinations to visit during the COVID-19 pandemic according to a study at the time by Germany-based travel company Tourane.

Thailand was considered the world’s safest travel destination during the COVID-19 pandemic based on various criteria including the 14-day notification rate of new COVID-19 cases and deaths per the European Centre for Disease Prevention and Control (ECDC).

At that time, Thailand had recorded a low number of COVID-19 cases and was scored 85 for the International Health Regulations.

These coupled with moderate population density, at 135, and the hours of sunshine per day for outdoor activities, 6.6 hours, plus having the greatest number of direct flights with Germany placed Thailand firmly in the top spot.