HUA HIN, 29 April 2016:  Four Thai men have now been arrested for the brutal attack on a British family in Hua Hin during Songkran, while the identities of the victims have also been revealed, Thai Visa.Com reported earlier today.

The victims have been named as Lewis Owen, 68, his wife Rosemary Owen, in her sixties, and their son Lewis John Owen, 43. They are believed to be from Wales.

On Thursday, a photograph was released to local media showing Rosemary recovering in her hospital bed, pictured alongside officials, who hospital staff claimed were for the Thailand Authority of Thailand. 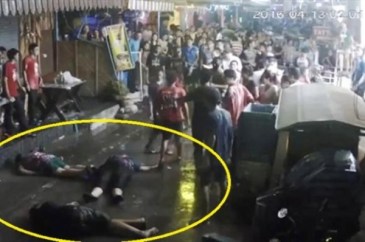 There were also as yet unconfirmed reports that some of the suspects were out on bail.

A  CCTV video of the attack in Soi Bintabaht, 13 April  has been shared, worldwide, with news organisations, newspapers from New Zealand to the UK and  social media platforms reporting the incident that will have a disastrous impact on the nation’s tourism.

Worldwide media quoted Kulsawek Sawekwannakorn, a Hua Hin based journalist for Daily News, who wrote on his Facebook page that four men have been arrested. Siwa (Neng) Noksri and Chaya (Boy) Jaibun are the latest two along with Supatta (Mong) Baithong and Yingyai (M) Saengkhamin, both 32, who were arrested 17 April and shown in bulletproof vests in front of grim-faced police.

Supatta has already given evidence that he was drunk and offered the lame excuse that the altercation started after the younger Owen brushed his arm.

The Tourism Authority of Thailand (TAT) is offering international visitors travel tips to help ensure a more enjoyable and pleasant stay, especially when arriving and staying in Bangkok. First impressions often start with an airport transfer into town from either Don Mueang International or Suvarnabhumi Airport.

Bangkok remains the No. 1 destination, with more than 22 million international overnight visitors, but Dubai tops the list for spending. The Global Destination Cities Index—which ranks 200 cities based on proprietary analysis of publicly available visitor volume and spend data—reveals that Bangkok remains the No. 1 destination, with more than 22 million international overnight visitors.

According to the procedure, items that are exempted from duty include passengers’ accompanying belongings that are worth no more than 20,000 baht. BANGKOK, 17 July 2019 (NNT) – The Customs Department has issued a document clarifying the customs procedure for air passengers arriving in Thailand.