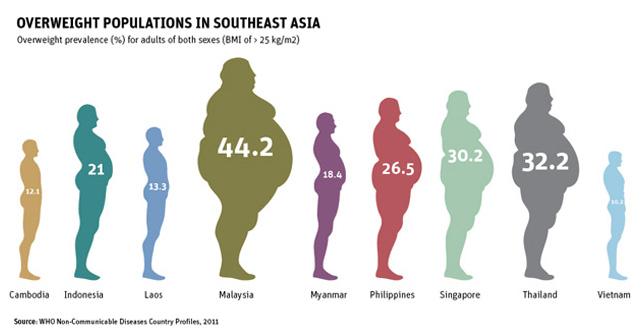 A recent study shows that Thais are tending to have more tendency to become obese, as the country now ranked second in ASEAN for the most people with obesity.

Thailand has now become one of the countries with the highest prevalence of obesity in Asia (second only to Malaysia), ahead of richer countries such as the Republic of Korea, Japan, and Singapore.

More Thais are becoming obese due to the current eating habits and data showed that Bangkokians were most at risk of becoming obese most, while the northeastern region showed the least risk of contracting the disease.

The data reflected that obesity is usually caused among city people who are well off and receive higher salaries than those who live in the countryside.

As for the ranking of obesity in the ASEAN region, Thailand came second after Malaysia, with the highest number of people with the disease.

As the lifestyle in Thailand rapidly changes, Thais are confronted with a new kind of plague: obesity. Thailand is among top five Asia-Pacific nations with the highest numbers of obese people, and by 2015 Thailand will have a whopping 21 million members of a “fat tummy network,” according to the Ministry of Public Health.

The shift from rural areas to the cities

This major demographic change has been occurring for some time now. Its implications include some reduction in the amount of physical activity undertaken, some weakening of family units and traditional lifestyle, and greater exposure to processed food and soft drinks.

Whilst we chit-chat about the weather, Thais routinely opt to discuss what they last ate. The Thai approach to food and eating is social and relaxed, often featuring multiple snacks or meals at irregular times of the day or night.

This approach developed in a time when most ate simple foods with low calorific content, walked more, and undertook manual labour. The outcome of introducing a sedentary lifestyle and processed and high-calorie foods into this equation, was never going to be pretty.

A food-centric culture combined with a fondness for sweetness

In addition, many Thai people love sweet tastes and add a considerable amount of sugar to many popular recipes. As an example, a key factor in the successful introduction of pizza to the Thai populace was the addition of extra amounts of tomato sauce (which is high in sugar) than is used in pizza topping in western countries.

Mr. Yingsak Jraipinit, food researcher from Pilot Plant Development and Training Institute of King Mongkut’s University of Technology Thonburi (Bangkuntien) said that there is much healthy Thai food such as a sour relish with sliced papaya (Somtam).

However, most Thais still love to eat very fat and oily food like Khao Ka Moo or fried banana (Kluai Thod), so it damages their health.

Many younger Thais are rejecting certain aspects of traditional Thai life as being decidedly ‘un-cool’ and old-fashioned, choosing instead to embrace available aspects of western culture/lifestyle. The implications of this include changes to earlier patterns of diet and exercise.

According to the statistics of the Ministry of Public Health on March 6,2008, it shows that 1.4 million of 17.6 million Thai children are obese because they lack exercise, sitting and watching television or play computer game all day.

Importantly, they love to eat too much snack, soft drinks and fast-food which can be prepared and served very quickly.

As in so many other countries, fast-food like KFC and McDonalds have been enthusiastically embraced in Thailand. Unlike in the West, however, fast foods are generally not cheaper or more convenient than the local fare … demand appears to be driven more by its western cachet.

Thais have not traditionally eaten things like ice cream, chocolate, and cakes/pastries. They have, however, had access to an extensive array of snack and convenience-type foods, most of which are based on staples like banana, rice, coconut, bean or tarot.

Many children now however would be embarrassed to be seen with anything wrapped in a banana leaf, choosing instead products that are highly-processed, advertised on TV and wrapped in colourful foil or plastic.

Further, where once water or coconut juice were seen as the beverages of choice, now flavoured (sweetened) milk and soft drinks like Coca-Cola are favored by younger generations.

A shortage of free time and disposable income: Working long hours, usually for six days each week, reduces peoples’ ability and propensity to exercise. A similar situation applies with Thai children, whose school day is often drawn out with commuting and after-school tutoring.

To make matters worse, most schools appear to place a low priority on sport and physical education. Little disposable income and often high levels of household debt mean that many are unable to afford to visit commercial recreation facilities such as modern gyms.