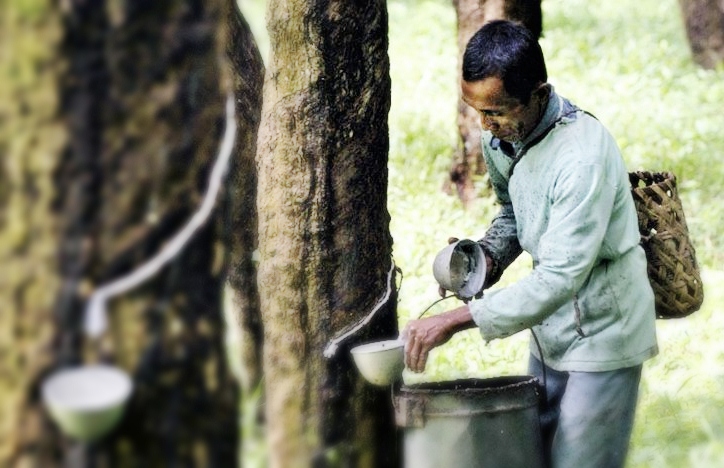 Protests and demonstrations against the slump in rubber prices has spread in Thailand’s southern province to other rubber-producing provinces including Chumphon, Surat Thani and Phatthalung. Protesters are moving towards a possibly harshest agenda, and have threatened to block the Surat Thani airport.

Rubber farmers rejected the Cabinet’s decision yesterday to offer financial aid to them at Bt1,260 per rai, at the maximum of 10 rai per household, and insisted on an increase of the rubber price to more than Bt80 per kilogramme. Their pledge is based on the highly criticized rice pledging programme for rice farmers, but the government has refused so far to yield to the rubber farmers’ demand.

The major protest site was at the co-op building in Surat Thani, and protesters were still blocking the Asian Highway at Nhong Klee intersection, in Phunphin district.

They threatened that if government representatives did not appear for talks by midday, they would block the Surat Thani airport.

Deputy Prime Minister/Finance Minister Kittiratt Na Ranong was reportedly scheduled to chair a meeting with 15 representatives from southern rubber planters at the Government Center on Chaengwattana Road in Bangkok.

In Nakhon Si Thammarat, more than 1,000 protesters moved from Tha Sala district office to block the main road which links the province with neighbouring Surat Thani, and set up a stage on the road. Only one lane remained open to traffic.

They threatened to close the Nakhon Si Thammarat airport if their demand for a higher rubber price was not met.

Earlier this week, the Cabinet today approved an allocation of Bt5.628 billion as a financial aid to rubber growers who will receive fertilizer subsidies of Bt1,260 per rai, at a maximum of 10 rai per household, to alleviate their hardship from the rubber price slump.

Deputy Prime Minister/Finance Minister Kittiratt Na-Ranong said an emergency fund would be transferred to the Bank of Agriculture and Agricultural Cooperatives to go directly to farmers.

About 980,000 planters who have tapped their rubber will receive assistance at this stage. They represented 80 per cent of rubber farmers countrywide who have registered with the authorities.

Mr Kittiratt said the Natural Rubber Policy Committee (NRPC) will meet again on Thursday to find additional measures to help growers who own more than 10 rai of rubber plantation while the Cabinet may be asked to allocate more budget if the approved amount is insufficient.

Towards a political crisis

Negotiations with between rubber planters and government representatives have failed so far as the rubber farmers have been demanding that the government start buying their crop at prices almost 30 per cent above the world market prices.

Considering the enormous losses it has incurred by continuing with the rice price-pledging scheme, the government is apparently decided not to repeat the same mistake with rubber and to let the farmer cope with the the world market price.

Farmers refused to accept the Cabinet’s decision and continued their protest in Surat Thani province today. They also blocked the southern highway, resulting in traffic congestion.

The rubber crisis is one of a number of problems facing Ms. Yingluck, as rubber farmers say she favors rice farmers, who are concentrated in areas where Ms. Yingluck’s political party, Pheu Thai, has strong support.

China to buy one million tonne of thai rice