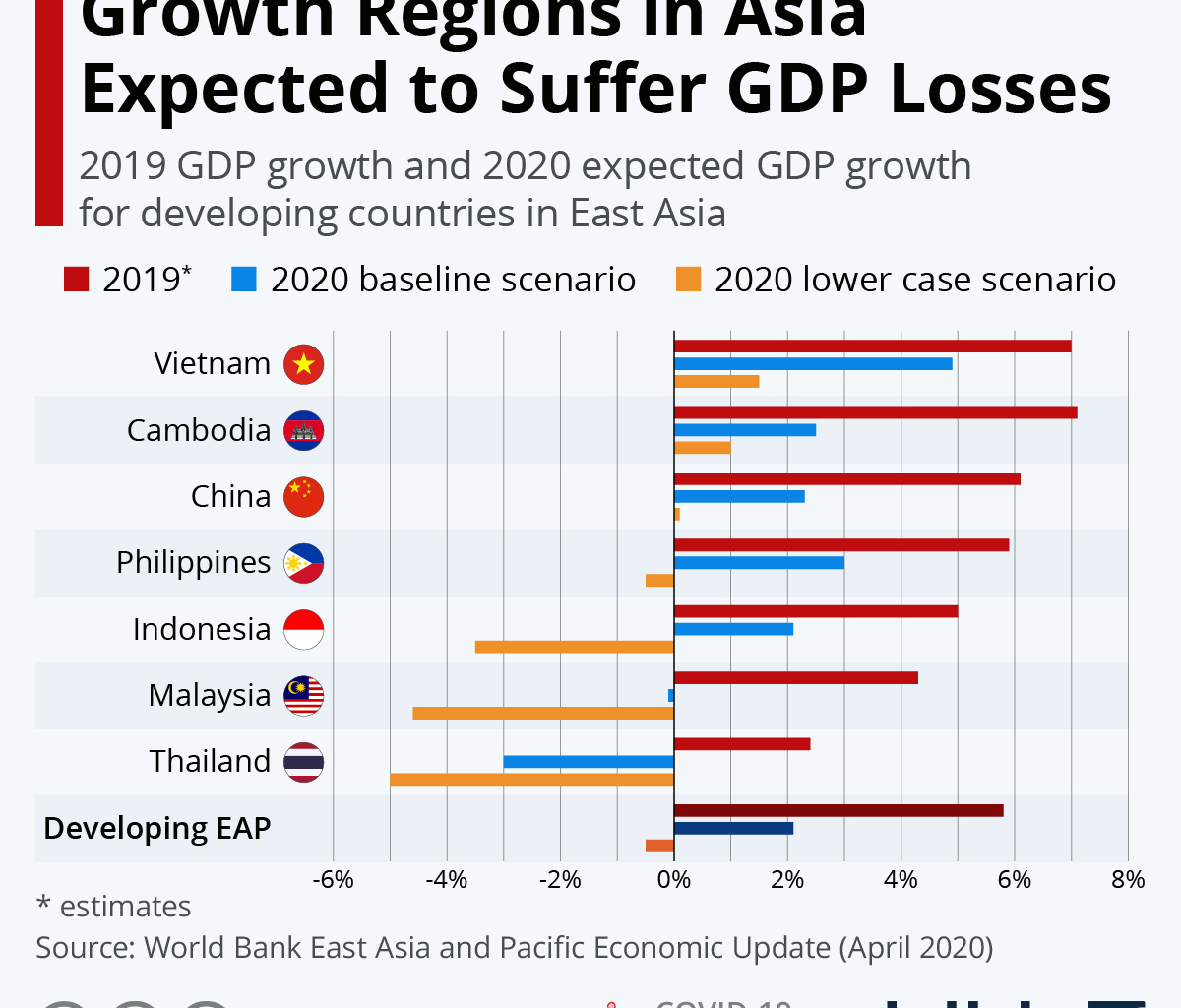 How bad is COVID-19’s impact on Asian developing economies?

Developing countries may not have the same deep and liquid bond markets that rich countries have, and they often have to issue bonds in foreign currencies, especially if bond issuance exceeds the ability of local bond buyers to absorb the new debt.
Share
Tweet
Share
Share
Share

In its April World Economic Outlook the International Monetary Fund (IMF) predicts a baseline case of negative 3 per cent global ‘growth’ in 2020, rebounding to 5.8 per cent in 2021. But it warns that things could get a lot worse.

Any economic forecast depends on how quickly the virus spreads, how deadly it is, how effective social isolation and distancing are, and if treatments, herd immunity or vaccines render it less destructive. We are still at an early stage of understanding these variables. There are hopes for a treatment this year and a vaccine next year, which would limit the time of economic shutdowns.

The impact in Asia depends on the length and severity of control measures. China and Vietnam are slowly letting up while Singapore is tightening. Indonesia is prevaricating. Malaysia, Thailand and perhaps the Philippines and India may loosen controls in May.

The economic response in rich nations has been astonishingly large. The United States added trillions of dollars to a deficit that before the virus stood at US$1 trillion. The Congressional Budget Office forecasts a deficit of US$3.7 trillion this fiscal year, nearly a fifth of GDP.

The Federal Reserve (the Fed), the EU Central Bank and the Bank of Japan are all going into overdrive, creating trillions of dollars, euros and yen by buying debt or lending to banks. The Fed is going further than the quantitative easing implemented a decade ago, even buying junk bonds to stabilise markets.

What are the implications for Asian developing countries and their economic management?

In general, developing countries do not have the same deep and liquid bond markets that rich countries have. They often have to issue bonds in foreign currencies, especially if bond issuance exceeds the ability of local bond buyers to absorb the new debt.

This creates a dilemma (economists call it ’original sin’) where the ability to use their own right to print money runs into the fear that this will cause their exchange rate to weaken and make it more difficult to repay debt. In trade-dependent countries, this can also considerably boost inflation.

The bottom line is that there is limited fiscal space to respond to emergencies like this virus. China could spend more but seems reluctant to force large loans and deficit spending this time, unlike a decade ago.

Some countries started in a fairly good fiscal position with low deficits and debt relative to income before the virus hit. Singapore, Malaysia and Indonesia were in relatively strong positions, while Vietnam, Thailand and India had deficit-to-GDP ratios between 6–8 per cent.

But if nominal income is growing rapidly — as it had been for Vietnam and India, but not Thailand — the ratio of debt-to-GDP is still falling. Vietnam’s nominal income was growing at 10 per cent a year, so its debt-to-GDP ratio was falling. If output falls sharply and the deficit grows, this can reverse itself. A combined fear of bond markets and limited fiscal space has prevented most Asian countries from increasing spending.

An additional consideration is the reliance of some countries, such as the Philippines, on remittances from workers abroad. These inflows are likely to fall dramatically, increasing pressures on many families and the overall availability of foreign exchange. The combination of falling remittances and curtailed informal work during shutdown will increase poverty and hardship.

The long-term economic impact depends on how quickly the economic freeze ends and how extensive the thaw is. Schools and stores may reopen as more spacing is created and masks are used. But getting factories to work normally again may require reorganising the workflow and spacing.

Tourism is likely to take much longer to recover

Commuting may become more complicated and offices may experiment with different working arrangements. People may not spend as freely as previously, dampening demand. There will be massive bad private debt as some companies go bankrupt.

Presumably, governments will bail out the companies they deem viable or necessary and write off the debts of those judged incapable of surviving. How this would work with private banks is uncertain. State banks have done this before, especially for state-owned enterprises.

There will be emergency loans from the IMF, World Bank and other groups, but they will not be nearly enough to allow developing countries to respond as rich countries have. Most workers in developing countries are in the self-employed or informal sector, which is of lower political priority to rescue than the formal sector. There may be loan forgiveness, cash grants or food distribution schemes to soften blows.

On the other hand, the age structure of most developing countries is much younger than the rich ones and the virus appears most deadly to the elderly. This may allow developing countries to isolate the relatively few elderly and allow younger people to return to normal life sooner.

Meanwhile, the extended period of ultra-low or negative interest rates on safe bonds will continue to drive a thirst for higher-yielding assets, many of which will be issued in developing countries. The flood of liquidity will flow into many emerging debt markets, taking some pressure off countries that manage the virus and the economic response well.

The virus will likely be a big setback but not a permanent blow in itself, unless it further reduces the willingness of nations to be open to flows of goods, people and ideas.

There’s the danger for Asia and the developing world.

David Dapice is a Senior Economist in the Ash Center for Democratic Governance and Innovation at the Harvard Kennedy School.

The University of the Thai Chamber of Commerce (UTCC) has announced the August 2022 Consumer Confidence Index score of 43.7, an 8-month high since February.

Growth prospects critically hinge on the return of foreign tourists, while soaring energy prices due to the prolonged war in Ukraine could further weigh on private consumption and external demand

Thailand’s export growth declined in October for the first time since February of last year.

If the resumed talks lead to an agreement, Thailand will become the third ASEAN country…
Loading Comments...